Gastroenteropancreatic neuroendocrine tumours (GEP NETs) arise from a variety of gastrointestinal neuroendocrine system (GI NES) cells and may behave differently according to the cell of origin and site of the tumours.

The diagnosis of GEP NETs should be made using routine haematoxylin and eosin-stained sections in which the typical morphology of NETs is evident. The diagnosis should be confirmed by immunohistochemistry.

While some NETs are readily recognisable, others are less so and some, particularly those with acinar growth patterns, may be mistaken for adenocarcinoma.

A panel of immunoperoxidase stains should be applied. As a minimum, chromogranin A and synaptophysin should be performed in all suspected GEP NETs. This may be adequate for the majority of NETs but this panel may occasionally need to be expanded to include CD56 (N-CAM), CD57 (Leu7), PGP9.5, as not all NETs express all markers. The NET panel should also be used for suspected combined glandular or squamous/endocrine tumours.

In the case of a metastatic NET, additional immunoperoxidase studies may help to determine the site of the primary tumour. The panel could include TTF-1, CDX-2, PDX-1 and NESP-55 to distinguish between pulmonary, pancreatic, foregut and hindgut NETs.[1] CK7 (foregut tumours, stomach, duodenum, pancreas) and CK20 (midgut and hindgut tumours) may be added to the panel.[2]

Although TTF1 is expressed by well-differentiated pulmonary tumours, TTF1 may however, also be expressed in 44%-80% of non-pulmonary small cell carcinomas and cannot therefore be relied on for identifying a poorly differentiated NET of pulmonary origin.

Immunostains for specific hormones may be helpful in certain circumstances but are not mandatory.

Ki-67 and mitotic counting should be reported as standard as these have been shown to have prognostic significance and are part of a new proposed grading[3][4] (see below). The Ki-67 stain correlates well with size, angioinvasion and behaviour of the tumour. The mitotic count should be included although mitotic figures may be hard to identify in small biopsy samples.

The difficulty with using only the Ki-67 labelling index as a guide to determining therapeutic options lies in the difficulty with which the index is assessed histologically. This is due to the following reasons:

The use of the Ki-67 labelling index alone may not be ideal for determining therapeutic options and the ENETs grading system may be more useful until more information becomes available over time.

Standards for classification, staging and grading

Knowledge of the development and biological nature of neuroendocrine tumours has advanced significantly from the days when they were referred to as carcinoids and considered to be a fairly homogenous group of tumours. They are now known to be a heterogenous group of tumours with different behavioural patterns depending on site of origin and cellular characteristics.

WHO 2000 classification of neuroendocrine tumours

The World Health Organization (WHO 2000) classification[8][9] attempted to stratify and separate NETs into behavioural categories according to size, depth of invasion and the presence or absence of angioinvasion. This led to the following tumour categories tabled below.

Recognising that the tumours behave differently according to site of origin, the size and invasion criteria varied between tumours of the stomach, upper and lower GI tract and pancreas.

This classification did not gain uniform acceptance owing to the combination of staging criteria with a grading system, and the difficulties with the acceptance of the category of tumours with uncertain malignant behaviour.

To address these problems, a histologic grading system based on mitotic rate and Ki-67 labelling index was proposed by the European Neuroendocrine Tumour Society (ENETS), which is tabled below.[3][4]

The ENETs classification system incorporates the histological grading system with the tumour stage in recognition of the malignant nature of these tumours and the influence of their biology and stage on the clinical outcome as in other malignant tumours.

WHO 2010 classification of neuroendocrine tumours

This grading system is now incorporated into the new WHO (2010) classification[10] of neuroendocrine tumours with corresponding changes in terminology.

The TNM Staging System for GEPNETS

A new TNM staging system for GEPNETS is included in the 7th edition of the Cancer Staging Manual of the AJCC [1] which should be used for the pathology staging of GEPNETs. The tumour assessment for the stomach, small intestine and large intestine differ and are listed below: 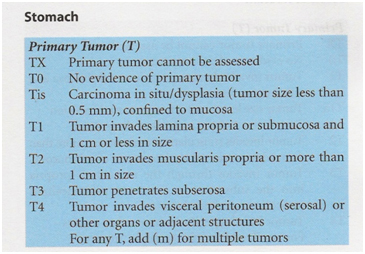 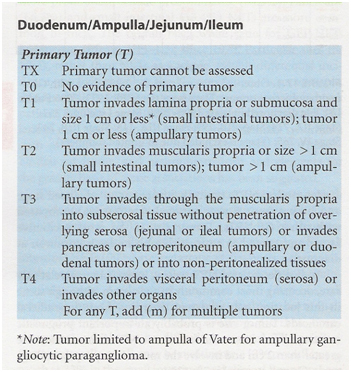 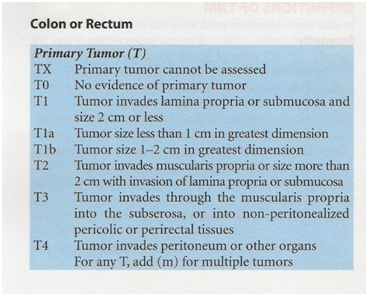 The Node and Metastasis assessment applies to all 3 gastrointestinal regions and is as follows:

The anatomic stage and prognostic groups are: 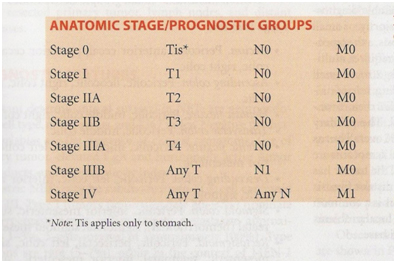 An assessment of the presence or absence of lymphovascular invasion, and clearance of surgical margins should be included in the pathology report.

Pancreatic neuroendocrine tumours are graded in the same manner as gastrointestinal tract tumours. For the staging of these tumours, the AJCC[11] adopts the same system as for pancreatic ductal adenocarcinomas (below) which differs from the ENETS stage groupings. 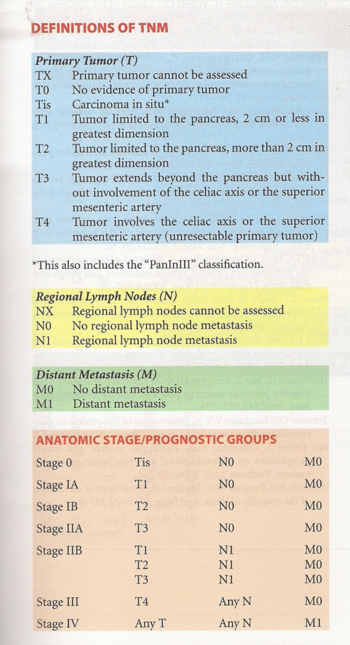 Note: For pancreatic NETs, the Tis category and explanatory note do not apply.

Checklist for the reporting of GEPNETs:

The summary of the report should incorporate the WHO 2010 classification of the tumour into NET G1, NET G2, NEC or MANEC, with the TNM tumour stage for the specific site.