Liver directed therapies may be contra-indicated by pre-existing hepatic insufficiency, or if this can be predicted to be likely following therapy. Selection of patients must be based on a combination of morphologic and functional imaging to establish the presence and extent of extra-hepatic disease. Unlike colorectal cancer where presence of unresectable extra-hepatic metastases generally contraindicates surgical resection of liver metastases, palliative hepatic resection in NETs may be considered in the context of multi-modality treatment paradigms.

For these reasons, the optimal management of patients with NET liver metastases should involve evaluation in a multi-disciplinary environment with access to advanced imaging techniques, interventional radiology, surgical and medical expertise.

The options available can be categorised as follows:

The treatment approach to patients with NET liver metastases is dictated, naturally, by the pattern of disease within the liver. Morphologically, there are three different patterns of liver metastases:

A. Simple Pattern: The metastases are confined to one liver lobe or limited to two adjacent segments so that they can be resected by a standard anatomical resection. This “simple pattern” occurs in 20 – 25% of the cases. These patients are treated with: (i) Surgery – minor or anatomical resection or (ii) Liver directed therapy if not fit for surgery.

B. Complex Pattern: There is one major lesion but with smaller satellite lesions contra-laterally. This “complex bi-lobar pattern” occurs in 10 – 15% of the cases. These patients are treated with: (i) Surgery – major one-step or two-step (i.e. sequential) resection. Prior to resection, portal vein embolisation can be performed to increase the size of the functional liver remnant (FLR). (ii) Liver directed therapy if not fit for surgery.

C. Diffuse Pattern: There are diffuse, multifocal liver metastases. This “diffuse pattern” occurs in 60 – 70% of the cases. These patients are unresectable and are thus treated with: (i) Liver directed therapy. 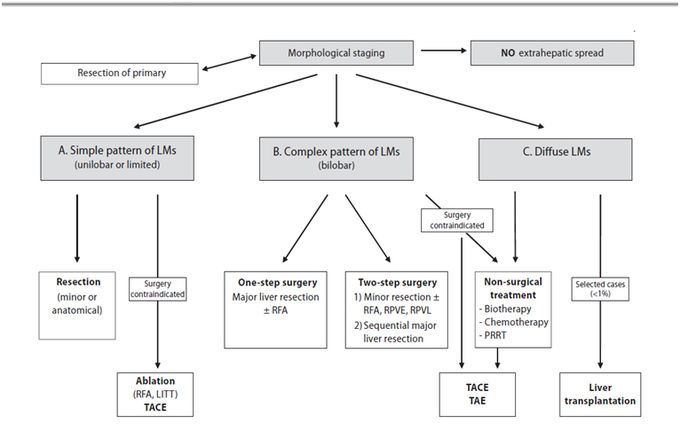 The first line of therapy in limited “simple pattern” (uni-lobar) and “complex pattern” (bi-lobar) liver metastases without extra-hepatic spread is surgical resection with or without liver directed therapy techniques. Patients with “diffuse pattern” liver metastases, and those who are poor surgical candidates, may be treated with biotherapy, chemotherapy, or liver directed therapy. 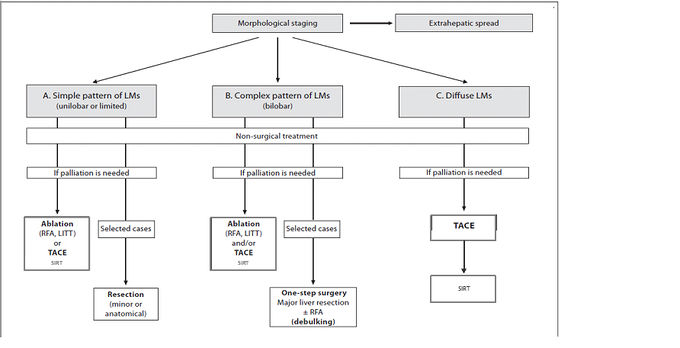 Patients with liver metastases with inoperable extra-hepatic spread should initially be treated using non-surgical methods (biotherapy, chemotherapy, etc) regardless of the extent of liver disease. If palliative steps are also required, liver directed therapy may be used in “simple pattern”, “complex pattern” and “diffuse pattern” liver metastases. Surgery (of a debulking nature) may be undertaken for selected candidates.

Key point: Surgical resection remains the gold standard in the treatment of NET liver metastases, achieving a survival rate of 60 – 80% at 5 years with low mortality (0 – 5%) and acceptable morbidity (close to 30%). The minimal requirements for resection with “curative intent” are the following:

In planning the operation, care should be taken to assess the amount and quality of the postoperative remnant liver parenchyma. In both synchronous and metachronous tumours, one- and two-step procedures may be undertaken, depending upon whether the liver disease is “simple pattern” (uni-lobar) or “complex pattern” (bi-lobar).

Debulking resections can be justified in exceptional palliative situations, however removal of at least 90% of the tumour volume is necessary. If the primary tumour is still present, it should be removed at this time as well.[1]

In patients with “diffuse pattern” unresectable liver metastases or who suffer from life-threatening hormonal disturbances refractory to medical therapy, liver transplantation has been considered as a treatment option for highly selected candidates. However at the present time it cannot be recommended as routine practice. See "Liver Transplantation" in the Surgery section of these guidelines for further information.

Key point: A long-term cure from the disease by transplantation will be an exceptional event even in this highly selected subgroup.

Ablative techniques such as RFA can be used effectively as anti-tumour treatment and in relieving symptoms in patients with NET liver metastases, either as a sole therapy or in combination with surgery.[2][3][4][5]

While surgery remains the therapy of choice in limited metastatic disease, RFA may be employed for palliation in order to avoid a major surgical procedure and it can also effectively supplement a surgical resection. In patients with tumours > 5 cm in diameter or near vital structures, RFA or other ablative techniques are not the most suitable single therapy.[6][7][8][9]

Selective hepatic trans-catheter arterial embolization (TAE) or chemo-embolization (TACE) may be used to treat liver metastases in patients where surgery is not feasible regardless of the origin of the primary tumour.[10][11][12]

Key point: These modalities are effective in controlling symptoms and tumour growth and result in significant decrease in biochemical markers with objective tumour responses in about 50% of patients. No current evidence exists that TACE is superior to TAE.[13][14]

The cytotoxic agents used include either doxorubicin or streptozotocin in a mixture with lipiodol. Because of their potential morbidity, TAE or TACE should be performed in experienced centres. A common side effect is post-embolization syndrome (presenting as pain, low grade fever, nausea and general malaise with little change in blood biochemistry usually lasting 3 days), but major side effects are rare.[15][16]

The procedures are contra-indicated in the case of complete portal vein thrombosis and hepatic insufficiency. In patients in whom liver transplantation may subsequently be considered, multiple TAE or TACE can induce endoarteritis rendering the vascular reconstruction at transplantation more difficult due to arterial thrombosis.[17][18]

Selective hepatic trans-catheter arterial chemo-embolization with drug eluting beads (DEB) or low density beads (also known as “precision TACE”) may be used to treat liver metastases in patients where surgery is not feasible regardless of the origin of the primary tumour.[19]

These modalities should be as effective as conventional TACE in controlling symptoms and tumour growth and result in significant decrease in biochemical markers with objective tumour responses.[20]

The procedure is contra-indicated in the case of complete portal vein thrombosis and hepatic insufficiency. In patients in whom liver transplantation may subsequently be considered, multiple treatments can induce endoarteritis rendering the vascular reconstruction at transplantation more difficult due to arterial thrombosis.[22]

Selective internal radiation therapy (SIRT), also known as radio-embolization (RE) or microbrachytherapy, may be used to treat liver metastases in patients where surgery is not feasible regardless of the origin of the primary tumour.[23]

Key point: This modality is effective in controlling symptoms and tumour growth and results in significant decrease in biochemical markers in patients with objective tumour responses.

While no current evidence exists that RE is superior to TACE, the US equivalent of ENETS the North American Neuroendocrine Tumour Society (NANETS), as announced in 2010, recommends radio-embolisation as a liver directed therapy in preference to TACE and TAE.[24][25]

Post-embolization syndrome is less common and less pronounced in patients undergoing RE compared to TACE and major side effects are rare in experienced institutions. RE is contra-indicated in the case of complete portal vein thrombosis, hepatic insufficiency, excessive lung shunting (as determined by Tc-99 MAA lung shunt study) and where non-targeted flow to the stomach or small bowel cannot be corrected by coil embolisation techniques.[26][27]

Increasing clinical data are becoming available from clinical trials on the safety and efficacy of RE in the management of NET liver metastases.[28]

Figure 3: Summary of clinical data on RE in NET liver metastases. 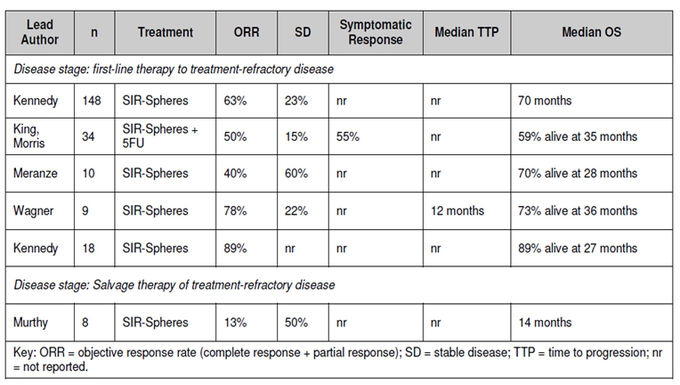 Potential advantages of radio-embolization over other liver directed therapies

A. Higher complete response rate of up to 18%:

C. SIRT may allow subsequent TACE, but TACE may rule out subsequent SIRT:

In the absence of evidence comparing them, these guidelines currently support the use of either TACE or SIRT as local regional therapies for this disease – acknowledging availability and cost issues. There seems to be therapeutic equivalence in survival for hepatic arterial chemoembolization and yttrium 90 microsphere treatments in unresectable hepatocellular carcinoma.[33]

The long-term complications of SIRT are yet to be established.

The use of DC beads outside clinical trials is not recommended, given many reports of complications.

The algorithm needs to clarify when these interventions need to be considered.

Sequential use of SIRs and PRRT

There is some concern about using PRRT after SIRs, but not the converse. The main theoretical issue is that a reduction in the regional delivery of the peptide to tumour deposits by virtue of radiation endarteritis, internal radiation fibrosis and reduced numbers of a viable, somatostatin-receptor expressing cells following SIRT may reduce the efficacy of PRRT, rather than major concerns regarding toxicity to normal hepatic parenchyma as a result of the combination of therapies. Based on limited experience of patients who have received both therapies, there is no contraindication to using these approaches as guided by the underlying principles to their use. Ideally, a reasonable interval of time (months) should separate the therapies to allow regeneration of normal liver function.

The number of treatments the liver can tolerate and the risk of cumulative damage is yet to be established.

If after treatment with SIRs there is evidence of hepatic toxicity, clinician considering PRRT should proceed with caution.

The systemic use of peptide receptor radionuclide therapy and I-131 MIBG therapy is dealt with elsewhere in these consensus guidelines. These therapies are suitable for patients with unresectable hepatic metastases even in the absence of extra-hepatic disease but in cases where there is dominant or exclusive involvement of the liver, consideration can be given to intra-arterial administration of either of these agents. Preliminary data using quantitative comparison of tracer uptake in NET lesions on PET/CT following intravenous versus intra-arterial Ga-68 DOTA-octreotate administration suggest that substantially higher dose can be achieved to lesions compared to other organs, including normal hepatic parenchyma, with direct intra-arterial administration.[34] Similar data are available for the use of intra-arterial I-131 MIBG.[35]