Guideline contents > After hysterectomy, what is the role of radiotherapy (external beam, brachytherapy) in the management of early stage high risk endometrial cancer

These guidelines will focus on the role of adjuvant radiotherapy in women with stage I and II (FIGO 2009)[1] endometrial cancer. It includes adenocarcinoma as well as papillary serous and clear cell carcinoma histological subtypes.

There is a lack of well-conducted randomised controlled trials to confidently direct adjuvant treatment decisions. Most data has been derived from retrospective reviews and other observational studies. This has resulted in a great deal of variability in the use of adjuvant radiotherapy for early endometrial cancer in Australia and around the world. If radiotherapy treatment options were more standardised, this would result in more consistent practice and improve the data available for research.[6][7] When there are no definitive studies to advise on the best treatment, the recommended treatment should be based on combined expert opinion.

There are a number of other factors that have made the development of evidence-based guidelines difficult for endometrial cancer.

The International Federation of Gynecology and Obstetrics (FIGO) released new staging guidelines for endometrial cancer in 2009.[1] Published data to date have however been based on the older FIGO 1988 staging system. This makes it harder to directly translate this data into current recommendations based on the new staging system.

Inconsistent reporting of histology of endometrial cancers has made comparing trials more difficult with more recent trials now requiring central pathology review.[8] While there are histological subtypes, including uterine papillary serous carcinomas (UPSC) and clear cell carcinomas (CCC), that are recognized to be more aggressive with a poorer prognosis, for endometrial adenocarcinomas the stratification of prognostic factors is more problematic.

Additionally, there are many prognostic risk factors that have been identified. These include patient age, lymphovascular invasion (LVI), the ratio of myometrial/stromal invasion to total myometrial thickness and tumour grade.[2][3][4][9] However, there is no concordance regarding the definition of intermediate and high-risk disease based on these risk factors both nationally and internationally. This makes interpretation of the published data more difficult.

There is variation in the type of adjuvant radiotherapy used for early endometrial cancer in Australia and internationally. The most commonly used methods of delivering radiation are multifield external beam radiotherapy to the pelvis (pelvic EBRT) and vaginal brachytherapy (VBT). Whole abdominal radiation (WART) has been used for the high-grade histological subtypes.[10][11]

There is also a great variability in the prescribed dose of radiotherapy with VBT dosing having the largest variation. The most widely accepted dose for pelvic EBRT in Australia is 45-50.4 Gy in 1.8-2 Gy per fraction, five fractions per week. Vaginal brachytherapy prescribing is more contentious and there is a wide variability in practice across Australia.[6] The dose for VBT used alone ranges from 30-40 Gy in four to six fractions. The dose for VBT used in combination with pelvic EBRT ranges from 12-18 Gy in two to three fractions.

There is a lack of data to support the routine use of adjuvant treatment in uterine cancer confined to the pelvis. There is evidence that adjuvant radiotherapy does improve local control in patients at high risk of recurrence.[2][3][4][5][9][12][13] The decision to treat should be made on an individual basis after considering local control and toxicity issues and after discussion with the patient.

A number of trials have shown that in early stage endometrial cancers adjuvant radiation improved local recurrence rates with no effect on overall survival - PORTEC-1,[2] GOG99,[3] MRC ASTEC and NCIC CTG EN.5[4] and Aalders et al.[9] PORTEC-1 and GOG99 used pelvic EBRT alone. Aalders et al compared VBT to VBT and pelvic EBRT and found that the additional pelvic EBRT was only necessary in the high-risk groups. The MRC ASTEC and NCIC CTG EN.5 trials found that VBT alone may be just as effective for local control as compared to pelvic EBRT. A lymphadenectomy rate varied between these trials and was only routinely performed in GOG99.

A number of meta-analyses of these randomised trials have also confirmed the local control benefit.[4][5][12] These meta-analyses support the use of adjuvant radiation in the intermediate to high-risk groups, and not in the low risk patients. Kong et al[12] also showed a trend towards improved survival in the high-risk group stage 1C (FIGO 1988) and grade 3 pathology group on subgroup analysis. Johnson et al[5] also demonstrated a potential survival benefit in the high-risk group with stage 1C and grade 3 pathology. Blake et al[4] in the most recent meta-analysis does not support any overall survival benefit with pelvic EBRT.

PORTEC-2[8] compared outcomes of pelvic EBRT to VBT alone. The study group included stage 1 or 2A endometrial cancer with features of high and intermediate disease:

2) stage 2A disease, any age (apart from grade 3 with greater than 50% myometrial invasion).

There was no significant difference in loco regional recurrence rates. There was less toxicity with VBT alone. UPSC and CCC as well as stage 1C grade 3 endometrial adenocarcinoma were all excluded from this study.

Presentation with stage II endometrial cancer is uncommon. There is a lack of evidence to determine optimal adjuvant treatment for this group with only observational data available, as there is no prospective data published.

There are a number of small retrospective reviews that support the use of VBT alone in those stage 2 patients that have been completely surgically staged.[14][15][16][17][18][19] There is a reduction in toxicity with this approach with similar local control compared to historical controls treated with pelvic EBRT. Randomised trials are needed to confirm this.

Local recurrence rates after surgery and adjuvant radiation (using a combination of pelvic EBRT and VBT) are low when tailored to surgical and pathological features.[14][20] These prognostic features include cervical involvement, the ratio of myometrial/stromal invasion to myometrial thickness, grade and extent of surgery.

With UPSC the prognostic significance of complete surgical staging including the extra-uterine features is important. It is not uncommon to find extra-uterine disease without any sign of myometrial invasion.

UPSC has a propensity to spread to peritoneal surfaces similar to ovarian serous cancers. Unlike early endometrial adenocarcinoma where recurrence is more likely in the local area including vagina and pelvis, UPSC tends to recur outside the pelvis and in multiple sites. There are conflicting data for the use of WART. There have been no convincing studies to support whole abdominal radiation (WART) over pelvic EBRT with many recurrences occurring within the abdominal field.[22][23][24][25][26] There are however other studies that do support the use of WART.[10][11] Currently there is no consensus on the use of WART. The benefit of chemotherapy will be discussed elsewhere.

Clear cell carcinoma (CCC) represents around 1-6% of all uterine cancers. There is a paucity of data on which to formulate guideline recommendations. Some data have suggested that CCC is not as aggressive as UPSC and behaves more like a poorly differentiated endometrial cancer.[27] Due to the lack of data, CCC should still be treated like UPSC. 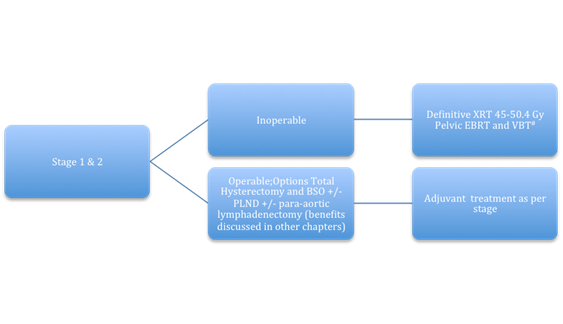 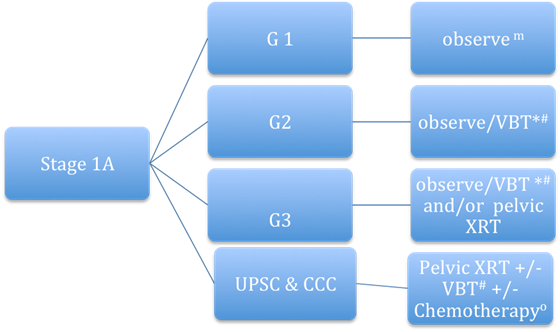 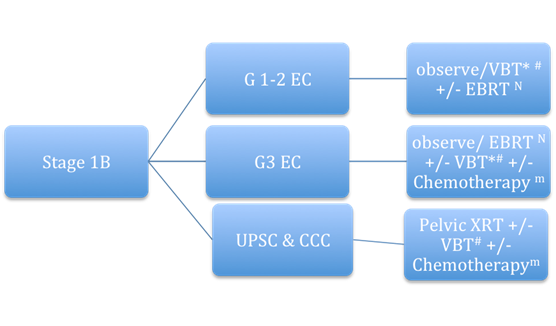 Table 1: Risk factors to consider for adjuvant radiotherapy based on published trials.

Table 2: Suggested VBT dosing guidelines based on PORTEC-2 and PORTEC-3

*Dose distributions should be obtained, and the dose in the bladder and rectum reference points should be computed (according to ICRU-38).
EDQ2 –equivalent dose to 60 Gy in 2 Gy per fraction when converted.