Is surveillance cost-effective for follow-up of patients with BO?

Guideline contents > Is surveillance cost-effective for follow-up of patients with BO?

Is surveillance cost-effective for follow-up of patients with BO?

Australia’s health system faces increasing pressure to contain healthcare costs, while still maintaining high quality and optimal care. Cost-effectiveness analysis is a process that systematically compares the relative healthcare costs and benefits of alternative strategies to inform policy-makers of the strategies with the best value.[1] There are a number of economic considerations in deciding whether the surveillance of Barrett’s Oesophagus is worthwhile. These include:

Review of the evidence

One systematic review summarizes the evidence for cost-effectiveness of endoscopic surveillance of non-dysplastic Barrett’s Oesophagus.[5] The review included seven studies that met the inclusion criteria[6][7][8][9][10][11][12] which were; 1) it had to be a comparison of surveillance for individuals with Barrett’s Oesophagus versus no surveillance, and 2) it had to include the key outcome of either quality-adjusted life year (QALY) or life-years saved (LYS) and 3) included both costs and health benefits in the analysis. Figure 1 illustrates the key results for the studies included in the review for the incremental cost per QALY/LYS ratios of endoscopic surveillance versus no surveillance strategy. Two studies by Sonnenberg et al. reported incremental cost per LYS.[11][12]

Figure 1. Key findings of cost-effectiveness of surveillance versus no surveillance (incremental cost per QALY/LYS gained ratios) 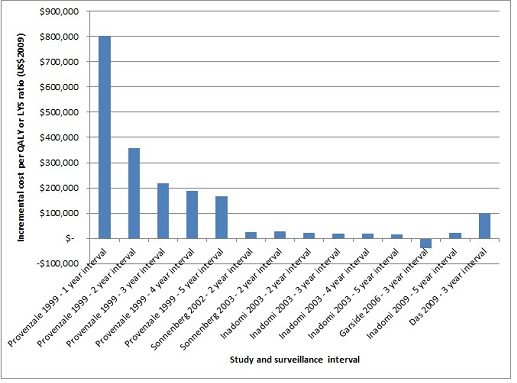 All studies were US-based with the exception of one UK study[7] and published from 1999-2009. All studies used decision-analytic Markov models to track hypothetical patient cohorts able to move between health states and reflect observed disease progression. The models were lifetime duration over 25-30 years or until death. The findings were inconsistent about the value of surveillance, ranging from being cost-effective to highly cost-ineffective.[6][8][9][10] In addition, the studies in the review used data that is largely outdated now. New evidence is available on quality of life, proportion of patients progressing among dysplasia grades, improved mortality rates for oesophagectomy and estimates on the natural history of Barrett’s Oesophagus.[3] Clinical practice has also improved with greater use of less invasive endoscopic techniques that promise to reduce treatment costs.

Key Limitations of the evidence in Hirst N et al. (2009) include:

One study in the UK by Roberts KJ et al.[15] that was published after the review period by Hirst claimed annual surveillance was cost-effective at £4,493 per life year gained. This study had ‘prevalent cases of cancer’ as the comparator and it is unclear if this is a suitable comparison. In addition, the analyses did not apply discounting or sensitivity analyses which are standard practice in health economic studies.

Patients who are most likely to benefit from surveillance programs are those at high-risk of developing malignancy. At the same time a targeted surveillance program will minimise unnecessary use of hospital resources. Three cost-effectiveness studies were identified that specifically addressed high-risk individuals; two involved biomarker testing[16][17] and one involved individuals with long-segment Barrett's oesophagus.[18]

Rubenstein’s approach was to determine how sensitive and specific a biomarker test would need to be, and how cheap, to be a cost-effective surveillance program.[16] In Gordon et al, the cost-effectiveness of surveillance in Australia was favourable under the hypothetical scenario of biomarker testing and where patients testing negative for biomarkers did not receive surveillance in the following five years and received two-yearly surveillance thereafter.[17] However, the model assumed that no cancers progress to advanced stage disease under such modified surveillance protocols, that is, all early cancers were successfully eradicated and there is only limited evidence available to support this.[17] Most recently, Kastelein et al concluded that surveillance was cost-effective in the Dutch healthcare system among individuals with long-segment Barrett's oesophagus (median 4cm) at intervals of 5 years for patients with non-dysplasia and 3 years for low-grade dysplasia.[18] These studies highlight the importance of the frequency of endoscopy surveillance which, if scheduled less frequently, can improve the cost-effectiveness of surveillance. However, currently surveillance intervals are consensus rather than evidence-based (see also How frequently should patients with BO undergo endoscopy?)

Presently, the appropriateness of biomarker testing, its efficacy within a surveillance program, its feasibility and its acceptance are yet to be determined. Further clinical and economic research involving patients with positive biomarkers and additional high-risk factors (e.g., male, the presence of oesophagitis, length of Barrett’s Oesophagus, and length of time with Barrett’s Oesophagus[19]) is required to assess outcomes from a more targeted high-risk surveillance population.

Economic evaluations are designed to assist with efficiently allocating scarce health care resources, that is, to minimise costs for given health outputs. Therefore, the cost-effectiveness of appropriate management strategies for patients with Barrett’s oesophagus should be considered. Based on the evidence of the malignant potential of Barrett’s Oesophagus in the general population versus those reported in surveillance program audits, surveillance of all patients with non-dysplastic Barrett’s oesophagus may not be cost-effective. Further work to identify high-risk individuals, those with long-segment Barrett's or positive biomarkers, appear promising to improve the economic efficiency of endoscopy-based surveillance of Barrett’s oesophagus.