What are the histological features of early adenocarcinoma of the oesophagus?

Guideline contents > What are the histological features of early adenocarcinoma of the oesophagus?

What are the histological features of early adenocarcinoma of the oesophagus?

For more information see What is the histological definition of BO?

Histologic features and grades of dysplasia

For more information see What is the histological definition and grading of dysplasia in patients with BO?

Although there are a great variety of structural manifestations of the development of adenocarcinoma, the key feature that allows a biopsy specimen to be classified as Oesophageal adenocarcinoma is the evidence of invasion of epithelial cells into the connective tissue matrix of the lamina propria. In neoplastic glands, the basal membrane is interrupted, which results in the invasion of epithelial cells into the lamina propria connective tissue matrix. Degrees of differentiation of neoplastic cells vary markedly and thus, histologic grading can describe tumours as being (i) well differentiated, (ii) moderately differentiated, (iii) poorly differentiated, or (iv) undifferentiated.

Early adenocarcinoma in Barrett’s Oesophagus refers to invasion into mucosa or superficial submucosa, but not deeper in the oesophageal wall. These tumours are stage T1 in the current TNM staging system. Adenocarcinoma exists when there is invasion of neoplastic cells beyond the basement membrane of the epithelium. The histological features identifying that invasion has occurred include:[1][2]

2. Complex architectural patterns characterised by solid growth patterns, tight cribriform growth pattern, glands with acute angulation in at least one part of their outline, and a pattern of anastomosing fusion of small glands. Most of these architectural patterns are common to invasive adenocarcinoma in other organs e.g. prostate and endometrium, and are familiar to histopathologists.

4. Desmoplastic stromal reaction. This is useful when present, however, it is recognised that early invasive adenocarcinoma of the oesophagus can invade without eliciting a histologically identifiable stromal reaction. 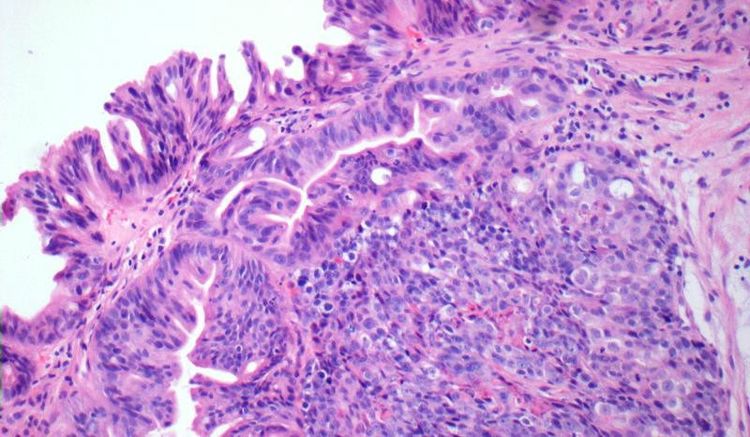 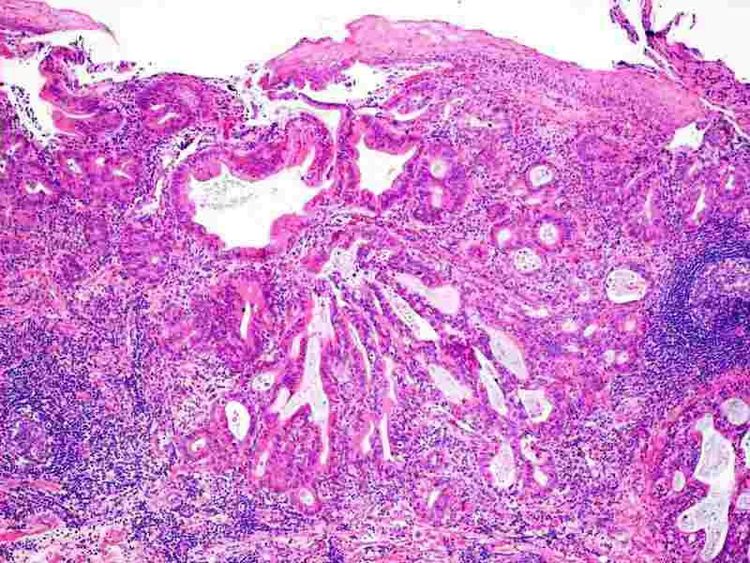 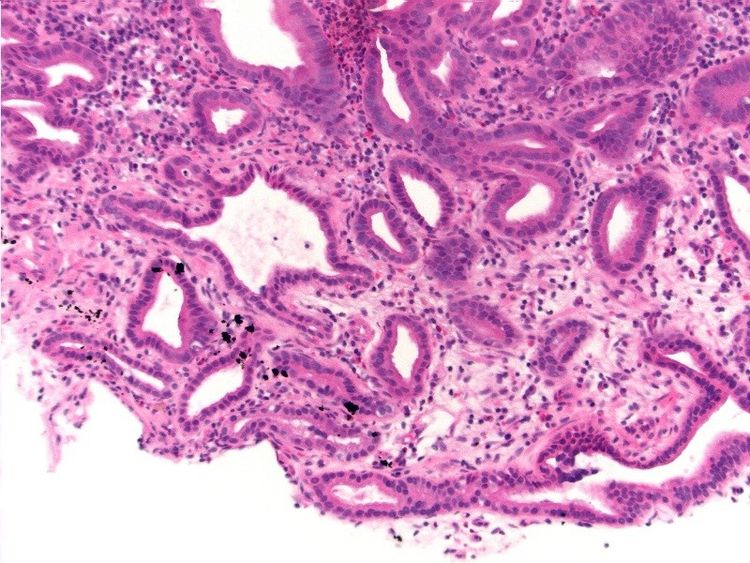 It has been well recognised that significant interobserver variability exists between pathologists in the separation of high grade dysplasia from early invasive adenocarcinoma in biopsy specimens.[3] Recent studies have identified a variety of histological patterns that predict a high likelihood of associated invasive adenocarcinoma (in subsequent specimens) in biopsies with high grade dysplasia. These are summarised below:

- Presence of an endoscopic lesion

The last two features were, in particular, highly predictive for the presence of adenocarcinoma.

At present there is no mandated requirement for pathologists to specifically qualify or quantify the features presented in these studies. However, it would be regarded as good practice for pathologists to communicate concern that invasive adenocarcinoma may exist when one or more of these features exist. 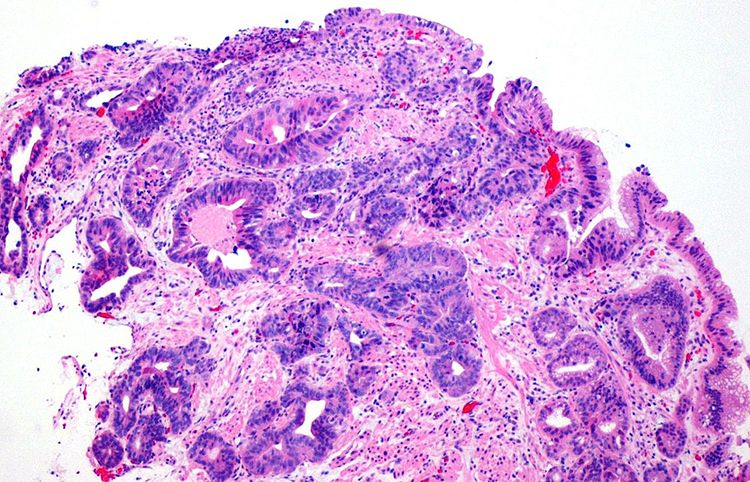 The issue of duplication of the muscularis mucosae in Barrett’s Oesophagus and its implication for sub staging early adenocarcinoma.

The muscularis mucosae is consistently thickened in Barrett’s Oesophagus. In at least two thirds of cases there is reduplication with the formation of an intervening fibrovascular stroma between the deeper native muscularis mucosae and the superficial new muscle layer. The intervening fibrovascular stroma is sometimes referred to as the ‘neo-submucosa’ while the entire reduplication process is called the ‘musculo-fibrous anomoly’.[6][7] The native submucosa resides beneath the deep native muscularis layer. In mucosal biopsies, adenocarcinoma may appear to invade through a muscle layer, however, because of the musculo-fibrous anomoly, it is not possible for pathologists to determine if invasion is into neo-submucosa or true submucosa. This distinction is prognostically important because invasion of neo-submucosa has a risk for metastasis approximately the same as intramucosal adenocarcinoma (<10%), while the risk for true submucosal invasion is higher (approximately 30%).[8] Correct assessment can be made on endomucosal resection specimens or formal resections. 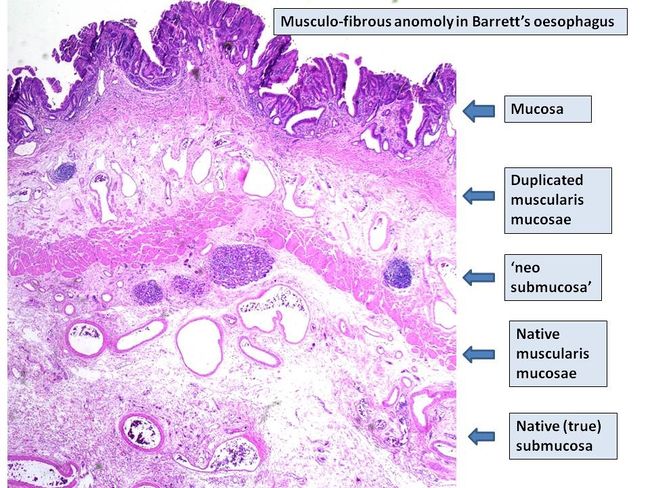 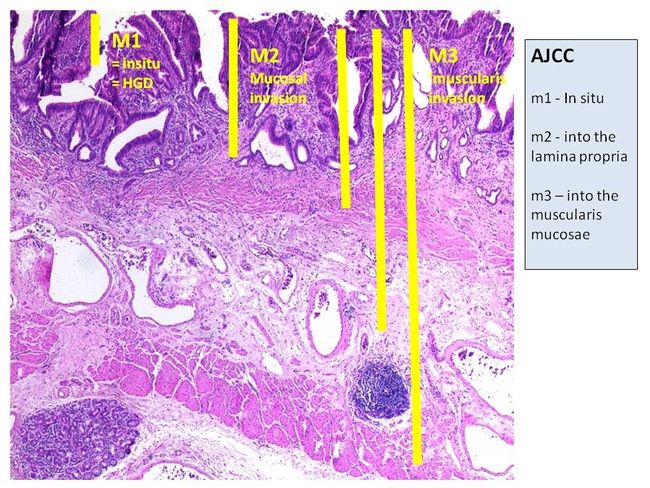 Since the AJCC system does not account for the musculo-fibrous anomaly, a second four tiered system has been recommended by Vieth & Stolte to better define mucosal invasion of adenocarcinomas.[9] In the Stolte sub staging system, T1a is sub-divided as M1-M4 as follows:

Pathologists are encouraged to report the sub stage of early adenocarcinoma using both systems and it forms part of the structured reporting guidelines for endomucosal resection specimens developed by the Royal College of Pathologists of Australasia.[10] 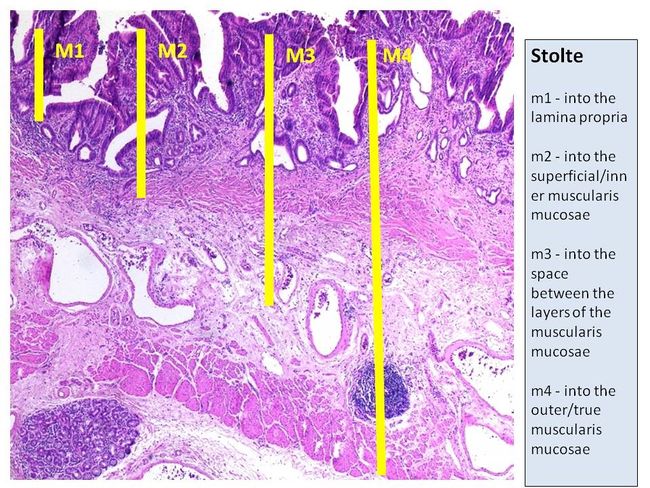 The histological report of endoscopic mucosal resections should include data that are important for clinical management, particularly the identification of patients who should be considered for oesophagectomy. These are discussed in greater detail in the guidelines for reporting oesophageal and gastro-oesophageal carcinomas provided by the Royal College of Pathologists of Australasia.[11]

The histological features for reporting include the following: