What is the clinical benefit of radiotherapy to the brain for patients with inoperable brain metastases from NSCLC?

Guideline contents > What is the clinical benefit of radiotherapy to the brain for patients with inoperable brain metastases from NSCLC?

What is the clinical benefit of radiotherapy to the brain for patients with inoperable brain metastases from NSCLC?

The brain is a common site of relapse in NSCLC. The risk of developing brain metastases after surgery is 10% for stage I and II NSCLC.[1] Brain relapse is higher in stage III NSCLC ranging from 27%-55% after curative treatment.[2][3][4] Brain metastases are usually symptomatic with symptoms from surrounding oedema (headache, nausea, vomiting) and/or associated neurological deficits.

Important factors to consider when determining the management of patients with brain metastases are: 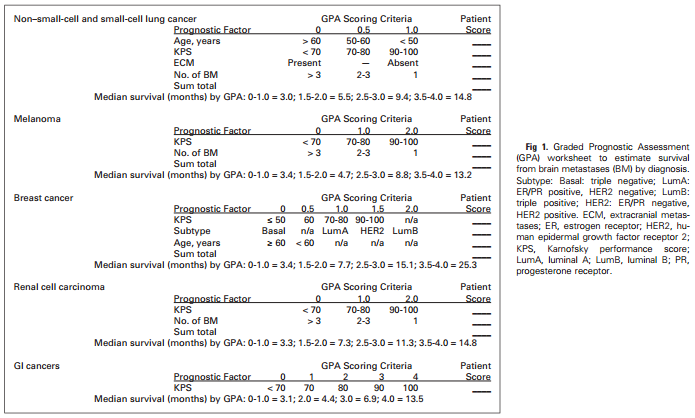 These prognostic models should be used to help guide treatment recommendations.

There is only one randomised study which has compared WBRT plus best supportive care including steroids (BSC) compared to BSC alone for patients with brain metastases from NSCLC in whom the attending clinician was uncertain of the value of WBRT.[7] An interim analysis after randomisation of 151 patients, has shown no significant difference in survival (49 days in the WBRT group vs 51 days in the BSC BSC group) or quality of life. The final results of this trial have been presented in abstract form.[8] The study population of 538 patients was representative of the clinic population with a median age of 66 years, poor performance status (KPS<70) in 38% and the presence of extracranial metastases in 54%. There was no significant difference in median survival (65 days WBRT vs 57 days BSC), quality of life or steroid use between the groups.

Pease et al also conducted a systematic review which included non-randomised trials.[9] The median survival of patients undergoing radiotherapy was 3.2-5.8 months. Historical data shows a median survival of 2-3 months with best supportive care and steroids. They concluded that whole brain radiotherapy may have a survival gain of up to three months in patients of good performance status. This has to be interpreted with caution due to the non-randomised nature of the comparisons.

Tsao et al conducted a systematic review of 39 randomised controlled trials of whole brain radiotherapy in 10835 participants.[10] These trials included patients with brain metastases from different primary cancers, although in the majority of trials over half the participants had lung cancer. Compared to 30Gy in 10 fractions, higher doses and longer fractionation schemes resulted in similar survival, symptom control and improvement in neurological function.

There have been many randomised trials of different radiotherapy dose and fractionation schemes for whole brain radiotherapy.[11][12][13][14][15][16] These trials are heterogenous in nature. Older studies included patients with symptoms of brain metastases and confirmation based on EEG or radioisotope brain scans rather than CT or MRI scans which have been used in contemporary studies. 56-80% of patients in these studies had metastatic lung cancer. Trials included patients with both solitary and multiple brain metastases. The patients had a range of performance status and neurological function.

The largest randomised trial was performed by the RTOG.[11] Patients were divided patients according to their neurological function (NF). NF I patients had minor neurological findings and could function normally, NF II patients were able to carry out normal activities with minimal difficulties, NF III patients were seriously limited in performing normal activities, required nursing care or hospitalisation, and were confined to a bed or wheelchair and NF IV patients required hospitalisation, constant nursing care and may have been unable to communicate or in a coma. Overall, neurological function improved in 47-52% of cases. Lung cancer patients who were NF II showed improvement in 37-38% of cases, and those in NF III improved in 66-72% of cases. The median time to neurological improvement was three weeks for NF II and one to two weeks for NF III patients. The median duration of response for all patients was 10-12 weeks. Median survival was 15-18 weeks. With respect to all outcome measures there was no advantage to doses higher than 20Gy in 5 fractions.

Other authors have examined a more favourable subgroup of patients by limiting trial entry to those with good performance status, good neurological function and/or controlled primary cancer or no extra-cranial metastases.[17][13][14][15][16] Gelber evaluated the outcomes of favourable patients (ambulatory, with absent primary or no extracranial metastases) in the RTOG trial. These patients had a median survival of 25 weeks compared with 12 weeks for other patients, however there was no effect of radiotherapy fractionation on survival. They recommended 20Gy in 5 fractions for these patients. Other trials have used 30Gy in 10 fractions as a standard arm and have shown no improvement in outcomes with higher doses of radiotherapy.[13][14][16] Priestman compared 30Gy in 10 fractions with 12Gy in 2 fractions and found that median survival was better in the 30Gy arm (median 77d vs 84d, p=0.04).[15]

Toxicity was poorly reported in most trials. Many patients develop temporary alopecia.[15] Acute and late Grade 2 toxicities are seen in approximately 20 % of patients. Severe toxicities (Grade 3 and higher) are seen in 2% of cases, both in the acute and late setting.[16]