What is the histological definition and grading of dysplasia in patients with BO?

Guideline contents > What is the histological definition and grading of dysplasia in patients with BO?

What is the histological definition and grading of dysplasia in patients with BO?

The management of patients diagnosed with Barrett’s oesophagus with low grade dysplasia (LGD) is currently uncertain, as there is considerable debate about the risks of progression to high grade dysplasia (HGD) or cancer in this group. Population-based studies which have followed Barrett’s oesophagus patients diagnosed with LGD in the community have reported rates of progression to cancer of ~0.5% p.a. (Hvid-Jensen et al 2011). In contrast, studies undertaken in academic centres in which diagnoses of LGD are made only after review by expert gastrointestinal pathologists report rates of progression as high as 13% p.a. (Curvers et al 2010). Importantly, in those studies, about 85% of patients diagnosed originally with LGD were down-staged to non-dysplastic Barrett’s oesophagus upon expert review. In the group of down-staged patients, the rate of progression was ~0.5% p.a – about the same as the rate observed in the community-based studies. These apparently conflicting data have implications for how LGD is diagnosed, how patients are managed and frequency of surveillance.

Features that characterise and are the basis for grading dysplasia arising in Barrett’s Oesophagus have not been subject to high level research evaluation. They are largely derived from clinical experience. Therefore, this review is based on information that is generally accepted, and has been published in a similar form in review papers and textbooks.

Definition of dysplasia in Barrett’s Oesophagus

Dysplasia is an unequivocal neoplastic transformation of the epithelial cells that is confined within the basement membrane of the metaplastic glandular tissue within which it arises. Dysplasia is a precursor lesion to invasive adenocarcinoma and, particularly in its high grade form, is a marker for the potential presence of adenocarcinoma elsewhere in oesophagus. Histological features that characterise dysplasia are best identified on standard H&E stained sections and are either a) cytological changes or b) gland architectural changes.[1][2]

Cytological features involve nuclear and cytoplasmic changes. Nuclear changes are increase in size, irregular shape, increased nucleus:cytoplasmic ratio, nuclear crowding, hyperchromasia, and the presence of nucleoli. Cytoplasmic change involves mucin depletion. Dysplastic cells exhibit increased mitotic activity, including atypical forms and surface mitoses. There is typically failure of cellular maturation toward the surface of the mucosa, although this is not always the case.[3] Goblet cell numbers are reduced and dysplastic cells may lose their normal vertical polarity.

Architectural features are irregular gland outline, variability in glandular size, gland crowding with ‘back to back’ pattern, and villiform surface contour. None of these cytological or architectural features are sufficient to diagnose dysplasia in isolation. Ancillary tests, such as p53, AMACR and Ki67 immunochemical stains, have been advocated to aid the diagnosis of dysplasia, however at present, no specific and reliable tests can replace conventional H&E examination and are therefore not recommended in routine practice.

Dysplasia arising in Barrett’s Oesophagus may be of intestinal (adenomatous) or gastric (non adenomatous) phenotype.[4] Cases displaying hybrid features also exist. Intestinal (adenomatous) type dysplasia resembles colorectal adenoma by exhibiting glands lined by tall columnar cells with hyperchromatic, pencillate, stratified nuclei and eosinophilic cytoplasm and sharp luminal borders. The gastric (non adenomatous) dysplasia type is mostly of foveolar pattern and is characterised by cuboidal to columnar cells with pale clear to light eosinophilic cytoplasm and round to oval nuclei, sometimes with discernable small nucleoli. The glands tend to be smaller and more closely associated than in adenomatous dysplasia and the luminal borders are less distinct. At present there is no requirement for the histopathologist to document the phenotypic subtype of dysplasia since the prognostic significance of this phenotypic subdivision is not known. 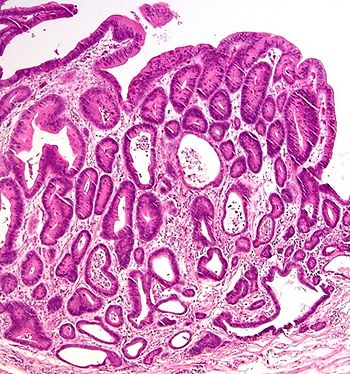 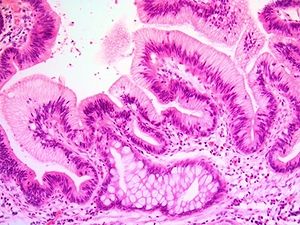 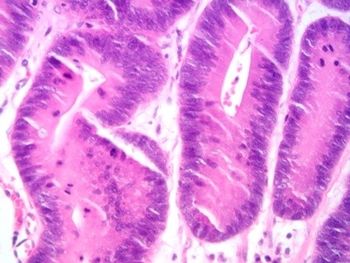 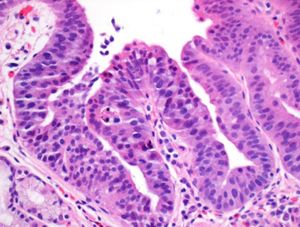 Grading of dysplasia in Barrett’s Oesophagus

Grading of Barrett’s Oesophagus dysplasia is best performed on the H&E stain. Pathologists should report Barrett’s Oesophagus biopsies as fitting into one of four categories.[1][2][4][5][6] The rationale for this tiered approach is to stratify patients into categories of increasing risk for development of or concurrent presence of oesophageal adenocarcinoma. Many papers have shown an increasing risk ranging from small (negative for dysplasia) to significant (high grade dysplasia).[7]

1. Negative for dysplasia – The histological features of dysplasia are absent.

2. Indefinite for dysplasia - This term is applicable when the pathologist believes that the biopsy is displaying some of the histological features of true dysplasia but is unable to exclude a non-neoplastic process as the cause of the abnormality. In general the consideration is whether the histological features are sufficient to diagnose low grade dysplasia. However, in some situations (discussed below) the pathologist is concerned that the features may represent high grade dysplasia. Pathologists are most likely to consider a biopsy exhibiting cytological atypia as being indefinite for dysplasia if it shows active inflammation, retention of normal crypt architecture, a normal ratio of glands to lamina propria, obvious signs of surface maturation, and has nuclear atypia that is only of mild degree.[8]

Figure 5. Indefinite for dysplasia - Cytological atypia and multilayering are present, however, there is associated acute inflammation

This concept has not been specifically studied, however, pathologists recognise a subgroup of indefinite for dysplasia, where the cytological and/or architectural abnormality is marked, however, a confident diagnosis of high grade dysplasia cannot be made. In some of these situations the concern is that invasive adenocarcinoma may exist. Reasons for not rendering a specific diagnosis include concern that the changes may be regenerative, reactive (e.g. medication or radiotherapy induced) or inflammation related; a small amount of material, particularly if at the edge of the biopsy; and the presence of only minimal architectural abnormality in a ‘very’ well differentiated adenocarcinoma. Basal crypt dysplasia[3] is a controversial pattern of high grade atypia that is restricted to the crypt base. It is associated with more conventional dysplasia in most cases. Whether this is true dysplasia remains controversial, so pathologists may apply the designation of indefinite for high grade dysplasia to this pattern. 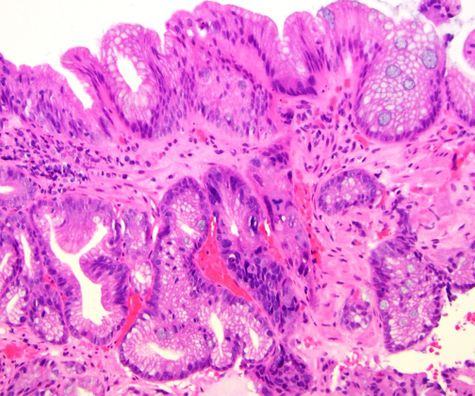 3. Low-grade dysplasia - displays mild to moderate cytologic atypia and, at most, mild disturbance of gland architecture. The neoplastic epithelial cells are crowded, elongated and hyperchromatic. The cells generally retain their vertical polarity. 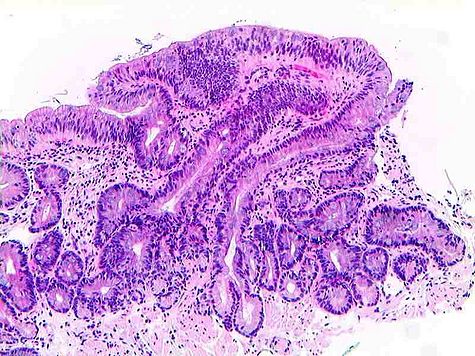 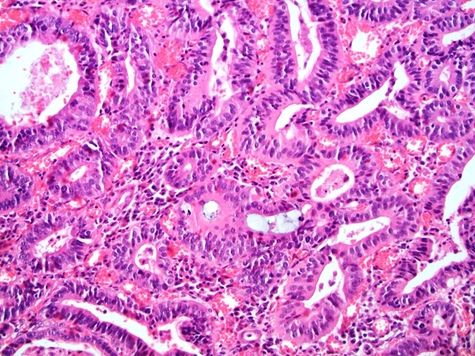 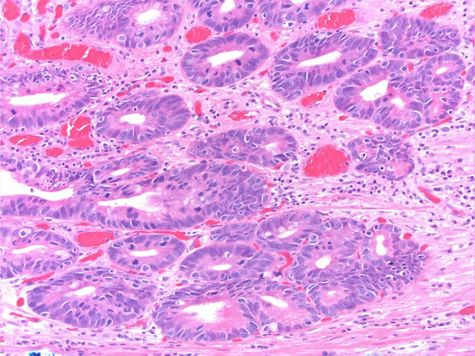 Interobserver variability in the histopathological diagnosis of dysplasia

Grading of dysplasia is subject to significant interobserver variability.[8][9][10] This is particularly true for the diagnosis of low grade dysplasia. Previously reported kappa values for interobserver variability among general histopathologists range from 0.14 to 0.32 (poor to fair). Specialist gastrointestinal histopathologists, particularly those with a special interest in Barrett’s Oesophagus, have better agreement with kappa values of 0.48-0.69 reported (moderate to good agreement).[11] In most cases where a diagnosis of low grade dysplasia is made by a general histopathologist and the diagnosis is subsequently changed on review by an expert panel, the effect has been to downgrade the diagnosis to ‘negative for dysplasia’. In a recent study where a review of all Barrett’s Oesophagus diagnosed as low grade dysplasia was undertaken by expert gastrointestinal pathologists, the cases persisting with this diagnosis had higher rates of progression to high grade dysplasia or oesophageal adenocarcinoma than those revised to negative or indefinite for dysplasia (33% vs 2% at 5 years).[11]

No good data exists on the interobserver concordance among general histopathologists for the diagnosis of high grade dysplasia, however, in a study involving specialist gastrointestinal pathologists there was substantial diagnostic agreement with kappa = 0.65.[12]

Interobserver concordance among pathologists has been demonstrated to be significantly higher for endomucosal resection specimens than for biopsy material in all grades of dysplasia.[13]

These data support the notion that all cases of Barrett’s Oesophagus diagnosed as dysplasia (indefinite, low or high grade) should be reviewed by at least one pathologist with a special interest in gastrointestinal tract pathology.