What is the incidence of neoplasia in patients with BO?

Guideline contents > What is the incidence of neoplasia in patients with BO?

What is the incidence of neoplasia in patients with BO?

The management of patients diagnosed with Barrett’s oesophagus with low grade dysplasia (LGD) is currently uncertain, as there is considerable debate about the risks of progression to high grade dysplasia (HGD) or cancer in this group. Population-based studies which have followed Barrett’s oesophagus patients diagnosed with LGD in the community have reported rates of progression to cancer of ~0.5% p.a. (Hvid-Jensen et al 2011). In contrast, studies undertaken in academic centres in which diagnoses of LGD are made only after review by expert gastrointestinal pathologists report rates of progression as high as 13% p.a. (Curvers et al 2010). Importantly, in those studies, about 85% of patients diagnosed originally with LGD were down-staged to non-dysplastic Barrett’s oesophagus upon expert review. In the group of down-staged patients, the rate of progression was ~0.5% p.a – about the same as the rate observed in the community-based studies. These apparently conflicting data have implications for how LGD is diagnosed, how patients are managed and frequency of surveillance.

This review will focus on high quality studies as demonstrated in the body of evidence (see Appendices below), and mainly focused on a few meta-analyses that summarised the question succinctly. Factors influencing the quality score included sufficient follow-up time, whether or not the studies were population based, versus those being undertaken in specialist centres. For noting, none of these studies are from Australia, and so local variations may be possible.

There are three main sources of data ascertaining the incidence of oesphageal adenocarcinoma (OAC) in patients with BO. First includes case series at one or several institutional endoscopy clinics where patients first assessed with BO are then followed up after a period of time, e.g. re-endoscoped after one or two years. The second is a variant of these, whereby incident cases are placed in a program to undergo regular endoscopic surveillance and the third, through population based registries, linked to follow up information, such as cancer, mortality and cause of death. Each of these data sources produces different estimates of incidence of OAC in people with BO. Sources of variation appear to depend on the definition of BO at onset (new cases versus prevalent, time of follow-up, setting (e.g. population vs. specialist centre and sample size, to some extent).

In performing this review it is important to distinguish prevalent cases from incident ones (ie. new diagnoses), and to be mindful that in a surveillance setting, the natural history of BO is interrupted by treatment of people diagnosed with high grade dysplasia. Depending on the effectiveness of this treatment, people undergoing such treatment ought to be ‘censored’ from follow-up as the natural history of progression would have been interrupted. Even in ‘population based studies’, patients with diagnosed BO may undergo intensive surveillance according to a country’s ‘national norm’ so the incidence of cancer may be underestimated. Further, certain studies that have focused on certain subgroups, e.g. smokers, or those with certain histological sub-types who are already at high risk of developing oesophageal cancer, may be providing estimates that may be higher than expected from a more general representative population. Size of study may influence results: Shaheen et al[1] reviewed 554 abstracts and included 27 articles including 2590 patients with BO, of which 87 developed oesophageal adenocarcinoma. Shaheen et al[1] suggests that in the setting of BO and oesophageal cancer incidence, there is a strong inverse relationship between the size of the study and cancer risk after BO. Finally, length of follow-up may also influence results. Studies of short duration may be picking up prevalent oesophageal cancers that may have been missed at baseline.

Incidence of OAC in patients with BO - population based studies

There are five population based studies that are pertinent here. Murray et al[2] performed population based record linkage of cases diagnosed centrally through Northern Ireland’s Pathology laboratories and linked these to cancer registration records and deaths. Overall annual incidence of oesophageal cancer six months after initial detection was 2.6/1000 person-years (py). The latest study of these series, using the BO Register[3] suggests an annual incidence rate of OAC after at least a year of follow-up overall of 1.3/1000 py, 1.6/1000 py in OAC and gastric cardia cancer combined, and 2.2/1000 py of OAC and high grade dysplasia combined. Schouten et al[4] in the Netherlands linked records of persons diagnosed with BO in a cohort of 120,000 individuals to the a national pathology repository ‘PALGA’, and estimated an overall annual incidence rate, after six months follow up of 3.3/1000 py, with 3.1 /1000 py in those followed up six months to one year and 4.3/1000 py in those diagnosed one to four years of follow up. Hvid-Jensen et al[5] linked records of 11,121 cases of BO via national cancer registry and death records and yielded an overall incidence rate for OAC of 1.2 cases per 1000 py (but 2.3/1000 py in those aged 50-69 years of age- an age range more comparable to the other studies). Alexandropoulou et al[6] using the UK General Practice Research Database where 398 approved general practitioner practices with a catchment population of three million patients record clinical and prescribing data on all their patients. In this study, the annual incidence of oesophageal cancer (OC), one year after documentation of BO between 1996 and 2005, was 3/1000 py.

There are indications that histological subtypes like the presence of intestinal metaplasia, high grade lesions, and length of the columnar mucosa suggesting higher risks. However, record linked studies sometimes miss out on further refinement (i.e. re-grading of lesions on follow up) once the index case has been ascertained. There is lack of censorship of possible intermediate events, e.g. treatment of high grade lesions.

Thomas et al[7] performed a meta-analysis of a review of 41 studies from 1966-2004. Overall the incidence of OAC was 7/1000 py, i.e. more than about double those found in population based studies. 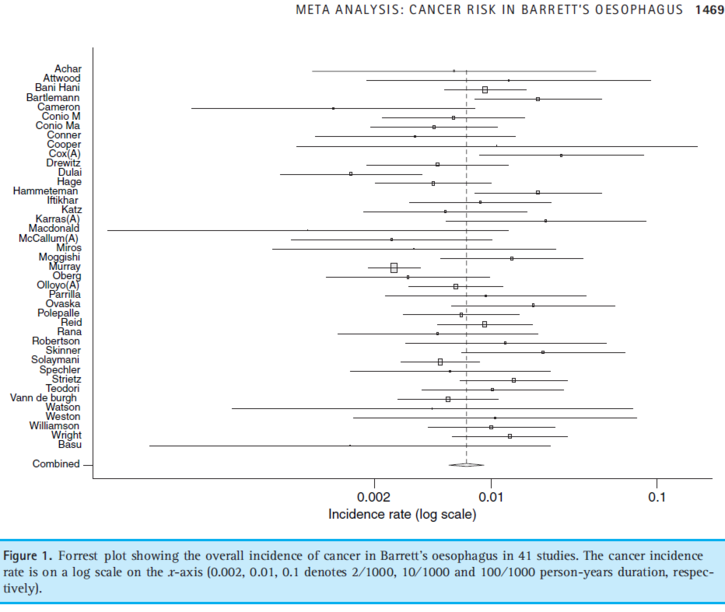 Desai et al performed a meta-analysis of 57 studies from 1966-2012 identifying 10 studies of the highest methodological quality, including those without any dysplasia at baseline. Overall, the annual incidence of OAC in those with BO at baseline 3.3/1000 py. No indication was given whether potentially prevalent cases of OAC were documented six months or one year after follow-up.

Jung et al[9] assessed records of patients with BO (columnar segment > 1 cm with intestinal metaplasia) and IMGEJ (intestinal metaplasia in biopsies from the gastroesophageal junction) from 1976 to 2006 in Olmsted County, Minnesota and followed up cases for a median period of 7-8 years. Demographic and clinical data were abstracted from medical records and pathology confirmed by gastrointestinal pathologists. Excluding those diagnosed with OAC within six months of diagnosis of BO, an estimated annual rate of 2.9 oesophageal adenocarcinomas per 1000 py was found. The rate was 5.0 per 1000 person-years for high grade dysplasias, suggesting if these were untreated, the risk of OAC would have been higher. The percentage follow up is not stated, but is assumed to be at least "reasonable" as over 80% of the county population attends one of the county's two health centres annually.

It is clear that studies among specialist centres 'yield' a higher incidence of OAC after BO than population based studies.

Australia is far more culturally diverse than the populations studied. There are no large local population based studies measuring the incidence of OAC in people with BO in the population. We have no data on the risk in relation to severity of pathology (IM, Dysplasia) nor on rates of incidence of high grade lesions and OAC. Lifestyle factors affect risk of progression and the relationship between those and outcomes would be important to unravel in a local setting.