Childhood brain tumour and leukaemia are the leading forms of cancer in children in Australia and developed countries worldwide.[1][2][3][4][5] Leukaemia is frequently reported as the most common cancer in children, representing approximately one-third of all diagnosed cancers[4][6] (see Figure 3). This is closely followed by brain tumours, the most common of all solid tumours in children. Brain tumours are commonly reported to represent one- quarter of all cancers in children in Australia.[1][2][7][4][6] In Australia, approximately 240 children are diagnosed with leukaemia every year, and 192 with brain tumour.[4] Forty-five percent of new cases of childhood brain tumour are in young children aged 0–4 years.[8] In the United States (US), brain and other central nervous system (CNS) cancers are more common than leukaemia in children in the 0–14 year age group.[3] Presentation, histology, and diagnosis of a brain tumour or leukaemia in childhood provides important insight into the progression, incidence, location, accompanying symptoms and complications, malignancy, and the treatments required to halt, remove, or cure it. The most common brain tumour type in children is widely reported to be the astrocytoma with an incidence rate of 30–50%.[9] The five-year survival rate for astrocytomas is reported to be 84%.[6] Most prevalent is the juvenile pilocytic astrocytoma, which is a solid tumour currently with a ten-year survival rate of 96%.[10][11][12][13][14][15][16][17] This brain tumour type commonly arises in the posterior fossa region in the brain, which includes the cerebellum, brain stem, and fourth ventricle. Sixty percent of all childhood brain tumours are located in the posterior fossa.[10][13][14][15][16] Males are more likely to develop an astrocytoma compared to females.[15] The next most frequently occurring brain tumour types in children are the medulloblastoma and the ependymoma; both malignant tumours with an incidence of 15–20% and 5–15% respectively.[15] [16][18][19] Five-year survival rates for medulloblastomas have been reported at 69%,[20] and 72% for ependymomas.[6] A slight male predominance is reported for both malignant types.[21][6] Other common brain tumour types include craniopharyngiomas (4–7%), followed by supratentorial primitive neuroectodermal tumours (PNETs), visual pathway gliomas, choroid plexus tumours, pineal area tumours, and brainstem tumours.[22][15][16] 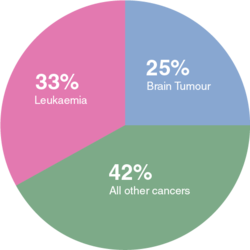 The most common leukaemia type in children is acute lymphoblastic leukaemia (ALL), accounting for more than 78% of diagnoses, followed by acute myeloid leukaemia (AML) at 16%.[9][23][24][25] Children diagnosed with ALL have a higher five-year survival rate of 93%, with 76% for AML.[6] Survival rates are similar across both genders.[6]


The occurrence of childhood brain tumour or leukaemia (CBTL) in children shows wide diversity. For example, tissue origin for brain tumours, location within the central nervous system (CNS), and natural history in terms of growth rate and tumour dissemination.[26] Resulting effects of CBTL are also greatly influenced by the age of the child at presentation. In particular, children aged less than 3 years of age at the time of CNS cancer treatment are considered to be at greatest risk for late effects due to the immature stage of their brain development.[21] Inherently, a great challenge exists in the management of CBTL in regard to the developing brain, in addition to a need to respect the long-term function of the CNS.[21][27][28]


Time to diagnosis rates are also one of the difficulties associated with paediatric diagnoses. This includes issues with early detection and accurate acknowledgement of early generalised, non-specific symptoms and insidious onset.[29][30][31] Increased detection rates and more widely adopted and routinely administered diagnostic imaging practices have contributed to increases in incidence rates,[14] particularly those seen in Australia and other developed countries worldwide.


However, continual improvements in imaging, neurosurgical techniques, radiobiographical knowledge of CNS radiation tolerance, and advances in chemotherapy and implementation of CNS prophylaxis, have resulted in improved treatment strategies and survival rates for brain tumours and ALL.[21][32] [24][25][26][27][28][33][34]

Additionally, late sequelae that can occur as a result of treatment for CBTL is now routinely recognised, with effects on cognitive, neuroendocrine, and neuropsychological systems being evaluated critically and minimised where possible.[21]

While cancer treatment is essential for survival, the developing brain is extremely fragile and susceptible to the effects of treatment required to treat brain cancer and leukaemia.[35][36] In fact, many effects resulting from CNS-targeted treatment are not realised until many years later,[12][37][38][39][40] with persistent impact on subsequent development and communication skills in particular, due to late-occurring structural and functional changes in the brain.[24][41][42] These changes are progressive and often irreversible and can appear any time up to 10–20 years post-treatment, interrupting normal development in children who face the largest proportion of their lives post-survival.[43][36] Even though modern treatment protocols have changed over the decades to reduce negative effects from CNS targeted treatments, such as phasing out the use of cranial radiotherapy for ALL and adopting CNS-targeted chemotherapy, not all negative treatment effects have been avoided.[44][24]


Children diagnosed with CBTL are at risk of a range of communication difficulties, from difficulties with producing clear speech, to understanding instructions, using vocabulary, producing sentences and grammar, and reading and writing.[12][24][37] [45][46][47][48][49][50][51] Children who are treated surgically for a brain tumour in the cerebellum are also at-risk of developing post-operative cerebellar mutism syndrome (pCMS), which involves a phase of mutism, or a total loss of speech, followed by speech and language difficulties.[52][53][54][55][56][57]


The impact of these communication difficulties on a child/adolescent’s ability to participate in everyday life can be vast. They may find it harder to learn to talk as toddlers, tell stories, solve problems, make friends, understand jokes, succeed at school, get their first job or date. Survivors remain highly at-risk for developing communication difficulties well after cancer treatment is completed. Skills that are yet to develop are most vulnerable, with these children failing to develop skills at the expected rate over time after CNS cancer treatment.[43][42] However, early intervention can minimise or prevent communication and swallowing difficulties if identified early.[12] [50][57][58][59][60][61]


While this guideline focuses on management in children, the impact of communication and swallowing difficulties on quality of life beyond childhood, adolescence, and into adulthood is also acknowledged for this population if they are not managed. Adult survivors of cancer may experience barriers to educational achievement as well as an impact to mental health, vocational independence and earning potential.[63][64][65] The long-term burden of CBTL can weigh on families, communities, and the health system, including costs that are associated with primary and ongoing healthcare services.[63][64]

Evidence that informed the guideline[edit source]

The two main recommendations presented in this guideline are evidence-based. They have been informed by three sources of evidence as depicted in Figure 4:

an abnormal mass of cells growing in the brain; can start to grow before birth in the foetal period, or anytime during childhood.

includes feeding behaviours that occur when eating or drinking (e.g. sensory responses to food, opening the mouth, chewing, and moving food or liquid around the mouth).

comprehension and production of words, sentences, and texts for communication.

refers to an individual’s ability to participate based on functional outcomes.

Grading of Recommendations, Assessment, Development and Evaluation; used to rate the certainty or quality of a body of evidence.