There is an inevitable delay between application of a test to detect cancer early and any reduction in cancer mortality a person or group of people may experience as result of the test. Therefore, testing people with only a short life expectancy may offer no benefit against which to balance the cost or inconvenience of the test or any short-term harm that may flow from it (e.g. consequences of a false positive test, or unnecessary treatment for a cancer detected that would never have manifest clinically during the person’s lifetime).

Time period for the benefit of PSA testing to become apparent

The ERSPC[1] and data from two of its component study centres (Rotterdam[2] and Gøteborg[3]) provided evidence on the time from first having a PSA test to the first appearance of a mortality reduction consequent on testing. This evidence was judged to be at moderate risk of bias. The search strategy, inclusion and exclusion criteria, and quality assessment are described in detail in the Technical report.

The ERSPC found little evidence that PSA testing at 2 or 4 yearly intervals reduced mortality before 7 years after testing began (RR 0.92; 95% CI 0.73–1.18). Thereafter, there was evidence of reduction in mortality at 8–9 years after testing began (RR 0.74; 95% CI 0.55–0.99), which was stronger again at 10–11 years after testing began (RR 0.62; 0.45–0.85).[1] The ERSPC and its Rotterdam and Gøteborg components also published plots of cumulative hazard of death from prostate cancer in screening and control arms by time since screening began (Nelson–Aalen method). Reading from these plots, it was estimated that divergence of the cumulative hazards was first evident at 7 years in ERSPC men aged 55–69 years, Gøteborg men aged 50–69 years and Rotterdam men aged 55–74 years, and at 6 years in Rotterdam men aged 55–69 years.

Evidence from the Gøteborg centre, with wider confidence intervals and higher risk of bias, suggests that the lower mortality from prostate cancer in the intervention group was no longer evident 9–12 years after testing ended.[4]

Figure 2.3. Percentage of Australian men of a given age remaining alive after 7 years from ages 50 to 100 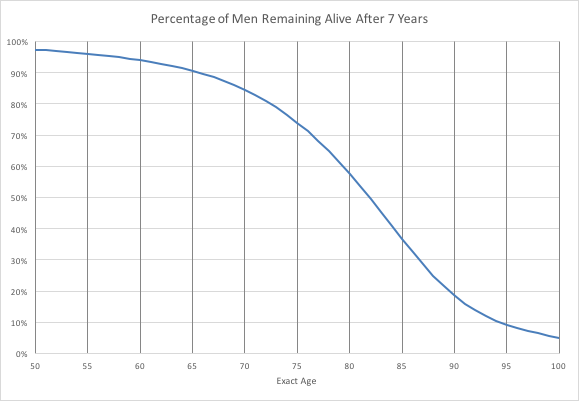 The Australian Life Tables 2010-12 are based on Census data and therefore represent the mortality of men and women in average health for their age. Many older men and women have a number of co-morbidities, which can have a significant impact on life expectancy. Hence, ideally the mortality data would be stratified by health status to enable more accurate advice to be given to a man about whether he is likely to live long enough to benefit from PSA testing. That is beyond the scope of this guideline. However, development of an online calculator tool based on Australian data, and which does take account of health status, is underway.

Health system implications of these recommendations

Implementation of the recommendation would require clinicians to consider life expectancy whenever they offer a PSA test. Current Australian guidelines for disease prevention in primary care advise that men with a life expectancy of less than 10 years are at reduced risk of dying from prostate cancer.[6] Reducing the estimate of the life expectancy at which a PSA test may have benefit from 10 years to 7 years may increase the number of men tested. However, it is not possible to predict whether there would be a net increase, reduction or no change in the number of men tested, because it not known whether all clinicians routinely discuss life expectancy when providing information about the risks and potential benefits of PSA testing, or the accuracy of life expectancy estimates in practice.

Implementation of this recommendation would have no significant resource implications.

No barriers to the implementation of this recommendation are foreseen.

ii The latest tables, the Australian Life Tables 2010-12, are based on the mortality of male and female Australians over the three calendar years centred on the 2011 Census of Population and Housing.[5]