In order to help men who are considering prostate-specific antigen (PSA) testing to make an informed decision and tailor their choices based on individual risk, it is necessary to assess factors associated with an increased risk of diagnosis of, or death from, prostate cancer. While many modifiable and non-modifiable risk factors for prostate cancer have been investigated, few have been clearly shown to be strongly associated with increased risk.[1] Fewer studies still have specifically assessed the risks for Australian men.

PSA testing strategies in high-risk groups outlines an approach that can be applied to any risk factor.

The PSA level of a man’s first PSA test is also associated with subsequent risk of prostate cancer. It has been suggested that baseline PSA testing for men in their forties is a useful way of identifying men who are at high risk of prostate cancer.[6] The evidence for PSA level as a risk factor is reviewed in Chapter 2 (see Using a PSA test result at a particular age to inform subsequent PSA testing).

All 11 retrospective cohort studies [7][8][9][10][11][12][13][14][15][16][17] (level III-2 evidence) that reported the risk of incident prostate cancer were of low quality, with a high risk of bias due to inadequate length of follow-up for the diagnosis of prostate cancer and inadequate control for potential confounding factors. Notably, none controlled for potential PSA testing bias resulting from the fact that men who have a close relative diagnosed with prostate cancer may be more likely to request a PSA test and then be diagnosed with prostate cancer. Similarly, the nested case-control study[18] (level II evidence) was also low quality with a high risk of bias.

Three of the retrospective cohort studies[15][7][8] also reported the risk of death from prostate cancer. These studies were assessed to be low quality with a high risk of bias, due to an inadequate length of follow-up.

The results were very consistent across studies that assessed risk of a prostate cancer diagnosis for men with a particular level of family history. Two studies [11][18] that assessed family history in third-degree relativesiii each reported a relative risk (RR) of approximately 1.2, with 95% confidence intervals that included 1 or had a lower limit close to 1. For family history in second-degree relatives, the same two studies[11][18] reported RRs of 1.3–1.4 and 1.7 (with a lower 95% confidence limit below 1) when the affected relative was diagnosed before age 55–60 years.

The observed association between family history and the probability of being diagnosed with prostate cancer may be affected by increased PSA testing in the exposed group. None of the studies directly addressed the potential impact of increased PSA testing of asymptomatic men with a positive family history. Data from the population-based Prostate Cancer Database Sweden[10] reported stronger associations between family history and diagnosis of Stage 1c prostate cancer (which is detected after a PSA test) and diagnosis closer to the time of that of the family member (within 1 year). In all but one of the studies reviewed,[13] the period of observation for the diagnosis of prostate cancer fell within the PSA testing era (after 1990). 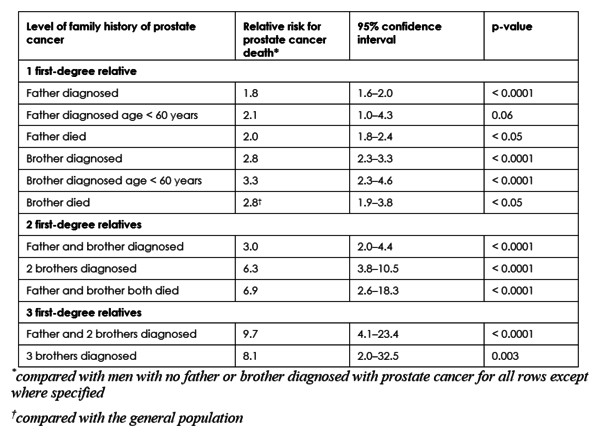 None of the studies were conducted in Australia. The generalisability and applicability of their findings to the Australian setting may be affected by a number of factors, including the degree to which PSA testing is used for screening asymptomatic men, and genetic factors (the majority of studies were conducted in Sweden). In addition, differences in the patterns of prostate cancer treatment may affect prostate cancer-specific mortality rates.

The effect of family history on the risk of prostate cancer-specific mortality is considered in Chapter 2.

Note on the recommendations based on this evidence

PSA testing strategies in high-risk groups includes a consensus-based recommendation for PSA testing of men whose risk of prostate cancer is estimated to be at least 2.5–3 times higher than average and for men whose risk is estimated to be at least 9–10 times higher than average due to any risk factors, including family history. No separate recommendation was made about PSA testing in men with risk factors that increase risk by a factor of less than 2.5–3 times average risk. The Expert Advisory Panel considered that this lesser degree of risk may not be sufficient to justify a change in the evidence-based PSA testing strategy recommendation for men at average risk, after taking into consideration the need to balance the potential benefits and harms of PSA testing.

ii For the current edition of this guideline, the scope of this clinical question was limited to family history. At the next edition, this systematic review will be updated and expanded to include other risk factors such as genetic factors (e.g. BCRA1, BCRA2, HOXB13 G84E, Lynch syndrome genes).