For men without a prostate cancer diagnosis or symptoms that might indicate prostate cancer what is the incremental value of performing a digital rectal examination (DRE) in addition to PSA testing in detecting any prostate cancer? (PICOi question 4)

DRE, in combination with measurement of serum prostatic acid phosphatase, was the standard method for establishing the clinical suspicion of prostate cancer prior to the introduction of PSA testing and systematic biopsy of the prostate. However, men were often reluctant to have a DRE and remain so today. Other problems were that a significant volume of cancer needed to be present before a DRE abnormality could be identified, and that there was significant observer variation. Therefore, in an era when PSA testing is increasingly offered to men concerned about the possibility of prostate cancer, with the aim of identifying much smaller foci of cancer, it is important to ask whether DRE still has an important role in the detection of asymptomatic prostate cancer.

Five studies[1][2][3][4][5] were identified that examined the benefits and harms of using DRE in addition to total PSA levels as initial tests to identify men likely to have prostate cancer. All the studies were assessed to have a moderate risk of bias. The search strategy, inclusion and exclusion criteria, and quality assessment are described in detail in the Technical report.

The most important data were provided by the Prostate Cancer Prevention Trial,[5] a randomised controlled trial comparing finasteride with placebo, in which men underwent testing for 7 years. This was the largest relevant screening study identified, and the only one in which men were biopsied regardless of DRE result or PSA level (i.e. screen-negatives as well as screen-positives were biopsied). Therefore, this study was able to provide reliable estimates of differences in sensitivity and specificity, as well as estimates of increases in cancers detected and unnecessary biopsies. The study was generally well conducted, with potential verification bias investigated and shown not to be an issue.[6] However, the risk of bias was considered to be moderate because the authors did not state whether DRE, PSA tests and pathologist review of biopsy specimens were performed blind. To avoid potential bias due to any possible effects of finasteride, only data from the placebo arm were examined in this review.

Figure 2.2. Trade-off between detecting true positives and adding false positives for PSA alone and in combination with DRE 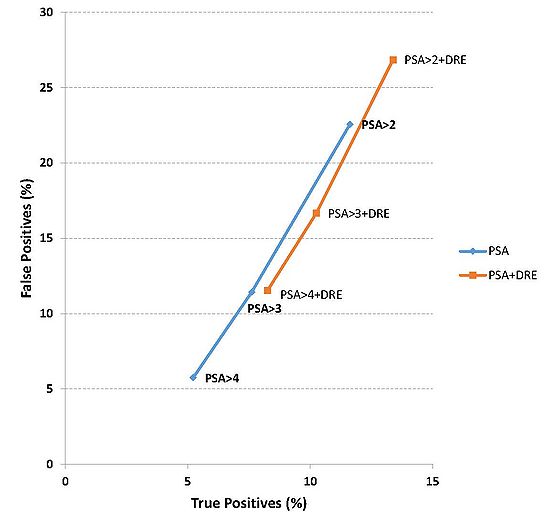 The other four studies[1][3][4][2] examined the addition of DRE to a PSA threshold of 4.0 ng/mL. The results of these studies were roughly in agreement as to the direction and magnitude of accuracy of the incremental gain. The number of false positives for every additional cancer detected was even higher in these studies, despite the use of more extensive biopsies in one study,[3] and the fact that DRE was performed by urologists or urologic residents in three of these studies.[1][3][4] However, differences in populations, the frequency of testing, and verification prevent pooling of the data and limit direct comparison.

Four studies[1][2][4][5] reported the effects of adding DRE to a testing protocol with PSA threshold of 4.0 ng/mL on cancer yield stratified by Gleason score:

The findings of the Prostate Cancer Prevention Trial[5] may not be generalisable to the Australian primary care setting because the trial cohort was comprised of men over 55 years old who had undergone previous screening (initial normal DRE and PSA < 3 ng/mL on entry to the study). In comparison, PSA testing in Australia covers a broader range of men. In addition, the trial investigators may have benefited from specific training and have had greater experience in performing DRE, compared with clinicians who perform DRE in Australian primary care. Therefore, the benefits of adding DRE to PSA testing in Australia may be fewer than those reported.

Health system implications of these recommendations

Current guidelines for preventive care in general practice[7] recommend both DRE and PSA for men who choose to undergo prostate cancer testing after being fully informed of the benefits, harms and uncertainties of testing. Therefore, implementation of this recommendation would alter current practice.

Misuse or new safety concerns from these recommendations are not envisaged. The Evidence-based guideline may reduce litigation alleging malpractice when a diagnosis of prostate cancer is perceived to have been delayed as a consequence of a primary-care practitioner’s non-performance of a DRE.

Implementation of this recommendation would have no significant resource implications. It may slightly reduce the consultation time for men attending primary care.

No barriers to the implementation of this recommendation are foreseen.