Ovarian cancer is a common malignancy that usually presents with advanced intra-abdominal disease. It is the sixth most common cancer in Australian women with a lifetime risk of 1 in 70 and a median age of diagnosis of 60 years. It is most common in developed Western countries and less common in developing or Asian countries. A strong family history of breast or ovarian cancer is the most relevant risk factor for ovarian cancer, with 10-15% of diagnosed patients having a mutation in the BRCA gene that confers susceptibility. Other risk factors include nulliparity, early menarche and late menopause. Protective factors include oral contraceptive use, pregnancy, lactation, tubal ligation and prophylactic salpingo-oophorectomy in mutation carriers. The tumour marker CA125 and transvaginal ultrasound are not effective measures of screening for ovarian cancer and are not currently recommended for use in asymptomatic women.

The symptoms of ovarian cancer are non-specific and include bloating, abdominal pain, early satiety and urinary urgency or frequency. Such symptoms should then be investigated with further imaging and measurement of CA125. Transvaginal US is the initial investigation of choice. Suspicious ovarian pathology should not be biopsied percutaneously as this may cause tumour seeding. Referral to a gynaecologic oncologist for further evaluation is recommended. In the event that ovarian carcinoma is discovered, extensive surgical staging should be performed including a total abdominal hysterectomy, bilateral salpingo-oophorectomy, omentectomy, peritoneal washings, lymph node assessment and careful examination of all peritoneal surfaces. If advanced disease is evident, debulking resection of all macroscopic disease to a residual of less than 1 cm, and surgery in a high volume specialised centre, is associated with improved survival. The extent of disease determines the stage (see Table 1), which is the most important determinant of long-term outcome.

About 90% of ovarian cancer consists of epithelial ovarian cancer (EOC). Within EOC there are different histologic sub-types, with the most common being high-grade serous carcinoma and less common types including endometroid, clear cell and mucinous histology. It is now thought that high-grade serous EOC originates from the Fallopian tube rather than the ovary itself. Less common histologies are malignant germ cell tumours of the ovary, carcinosarcomas and sex cord-stromal tumours. Primary Fallopian tube carcinomas and primary peritoneal carcinomas behave and are treated in a similar fashion to EOC. Australian guidelines recommend that all women diagnosed with a high-grade serous, endometroid or clear cell EOC below the age of 70 are referred for BRCA1 and 2 mutation testing.

The majority of patients present with Stage III disease. Adjuvant chemotherapy following surgery is recommended for some Stage I and all Stage II, III and IV disease in fit women, as this improves long-term survival. This usually consists of 6 cycles of treatment with intravenous single-agent carboplatin or carboplatin plus paclitaxel. Evidence also exists that women with Stage III disease who are debulked to minimal residual disease gain additional benefit from some of the chemotherapy being given via an intra-peritoneal route. Patients with ovarian germ cell tumours require different chemotherapy regimens and should be managed in specialised units.

Most patients with advanced disease will develop recurrence following this initial treatment. They may undergo debulking surgery again but usually are treated with more chemotherapy with the aim of improving symptoms and quality of life. The effectiveness of chemotherapy diminishes with each administration as the tumour becomes progressively resistant, even if different drugs are used. Troublesome symptoms of advanced disease including recurrent ascites, abdominal pain and small bowel obstruction require skilful palliation.

Mrs KM is a 65 year old woman with no past medical history and a sister with breast cancer. She presents with loss of appetite and increased abdominal girth. Clinical examination reveals a distended abdomen with shifting dullness. Abdominal ultrasound reveals extensive ascites and the suggestion of bilateral adnexal masses, which are confirmed on CT scan. 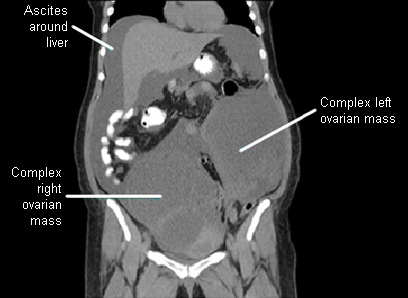 She is referred to a gynaecologic oncologist who performs an aspirate of the ascitic fluid. Cytological analysis reveals the presence of malignant cells consistent with a serous carcinoma. Her serum CA125 is elevated. A laparotomy is performed where ovarian masses are confirmed along with extensive peritoneal metastases and omental involvement, indicating Stage III disease.

Resection of all macroscopic residual disease is performed including a partial large bowel resection. Two weeks after surgery, Mrs KM commences adjuvant chemotherapy with carboplatin and paclitaxel for the next 5 months. During primary treatment she is referred for genetic testing and found to carry a BRCA1 mutation.

Following treatment she remains well for 14 months until she develops left groin pain and bloating. Her CA125 has also risen. CT abdomen shows recurrent disease in left sided pelvic lymph nodes as well as extensive peritoneal disease and moderate ascites. She commences second line chemotherapy with carboplatin and liposomal doxorubicin for 6 months. This improves her groin pain. Two months after finishing chemotherapy however her ascites returns and her CA125 starts to rise again. After draining the ascites she receives further chemotherapy with weekly paclitaxel infusions, but her ascites continues to reaccumulate rapidly. She also develops a partial small bowel obstruction which is considered inoperable and fails to improve with bowel rest and corticosteroids. As she is too unwell to have further chemotherapy, she is transferred to hospice. During her illness other family members are tested with some also found to carry the BRCA mutation. Her sister and niece elect to undergo a prophylactic bilateral salpingo-oophorectomy following completion of child-bearing and remain well long-term.

Endometrial cancer is the seventh most common malignancy, which will be diagnosed in 1 in 50 Australian women. Oestrogen without progesterone use is a potent risk factor, as is obesity due to oestrone production by adipocytes. In Western countries, it is the most common female genital tract malignancy with increasing incidence due to increasing obesity. Inheriting a mutation in one of the Lynch syndrome genes is also a risk factor.

The presenting symptom in 90% of cases is post-menopausal bleeding, which permits diagnosis at an early stage. This symptom should be investigated with endometrial sampling via bedside pipelle or dilation and curettage performed under anaesthesia. The most common histological type of endometrial cancer (Type I) is endometrioid adenocarcinoma, which originates from atypical endometrial proliferation and is oestrogen driven. Less common Type II endometrial cancers are more aggressive and include serous, clear cell and carcinosarcoma.

Surgery is frequently curative treatment and provides additional staging information. The most relevant staging criterion indicating disease at higher risk of relapse is the presence of lymph node involvement. High histologic nuclear grade also indicates a worse prognosis. For early disease limited to the uterus, total abdominal hysterectomy and bilateral salpingo-oophorectomy is sufficient, but more extensive surgical staging similar to EOC may be recommended for more advanced disease. Lymph node sampling or dissection may be performed for disease with deep uterine myometrial invasion or aggressive histology to give additional staging/prognostic information but has not been shown to reduce mortality. Laparoscopic hysterectomy may be associated with reduced post-surgical morbidity in appropriate cases.

Those women diagnosed at a younger age or with a family history of other Lynch syndrome associated cancers such as bowel cancer should be referred for consideration of genetic testing. Initial screening for this involves assessment of the resected cancer for the presence of micro-satellite instability.

Optimum adjuvant treatment of endometrial cancer is still evolving. Most recurrences of endometrial cancer are local, occurring in the surgical field. Radiotherapy delivered via external beam or by direct insertion of an applicator containing radioactive source into the vagina (brachytherapy) reduces the chance of local recurrence but does not impact on overall survival. For low risk early-stage disease (Type I, Stage I or II, low grade, without lymphovascular invasion) the aim is to avoid over-treatment, and observation with or without vaginal brachytherapy is appropriate. Such brachytherapy has less impact on quality of life than external beam treatment. For higher stage or high risk disease, adjuvant chemotherapy may be used in addition to external beam pelvic radiotherapy, particular for those with residual disease where the chance of developing metastatic disease is high. The role of chemotherapy in earlier stage disease is being explored in clinical trials. For locally recurrent disease, salvage radiotherapy or surgery may cure patients. For disseminated recurrence, treatment options include progestogens particularly for Type I well-differentiated disease, or chemotherapy for Type II or aggressive Type I disease.

Cervical cancer is the second most common cancer affecting women worldwide, particularly in developing countries. It is caused by infection with the human papillomavirus (HPV), the most common sexually transmitted infection in the world. Serotypes 16 and 18 of HPV are responsible for 70% of cervical cancer. Persistent HPV infection leads to the development of cervical intraepithelial neoplasia, a precancerous lesion, at the transformation zone of the cervix. Immunosuppression as seen in HIV or post organ transplant is a risk factor for persistent infection and cancer development. Smoking is an additional risk factor. The precancerous lesions may be detected by cervical smear and observed closely following it’s ablation via conisation, cauterisation or large loop excision of the transformation zone (LLETZ). Because of the effectiveness of screening with Pap smears, cervical cancer is now rare in Australia, with only around 800 cases diagnosed each year, mostly in those from disadvantaged backgrounds who have not participated in screening. The recent development of HPV vaccines should eventually reduce the incidence of cervical cancer by preventing the major risk factor.

Most cervical cancer is of squamous cell histology (80%), with adenocarcinoma being less common. It presents with abnormal vaginal bleeding or vaginal discharge, and is also commonly discovered via screening cervical smear which is recommended for all sexually active women. Staging is based on clinical examination, but may be aided by the use of MRI and PET scans used to delineate invasion into surrounding structures or nodal spread and for planning of appropriate treatment. The International Federation of Gynaecology and Obstetrics (FIGO) staging system is shown in Table 3.

For Stage I disease, surgery is an option, which may preserve ovarian function in younger patients. Outcomes are equally good with external beam radiotherapy followed by brachytherapy, but this will induce menopause. For more locally advanced disease, combination chemotherapy and radiotherapy is the treatment of choice and is able to cure two thirds of women. Metastatic disease is managed with chemotherapy along with optimum palliative care.

Mrs TD is a 45 year old unemployed smoker. She has had 6 months of bleeding post intercourse. Eventually she attends for her first Pap smear, but the cervix is clearly abnormal on speculum. She is referred to a gynaecologic oncologist. Cervical biopsy is performed, and confirms a squamous cell carcinoma of the cervix. She is clinically staged to have FIGO stage IB disease. MRI suggests corpus uterine invasion and PET scan shows no lymph node metastasis. She is treated with external beam radiotherapy for 5 weeks concurrent with weekly cisplatin chemotherapy. Following this treatment she receives brachytherapy. She is advised to apply oestrogen cream to the vagina with a vaginal cylinder to prevent post-radiotherapy vaginal stenosis. She is reviewed thereafter with intermittent vaginal examination and management of survivorship issues including smoking cessation support. Her disease does not recur. 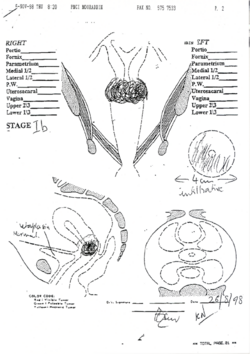 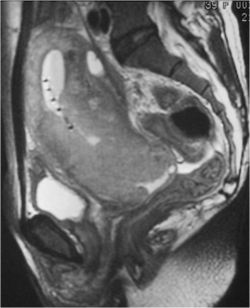