Our immune systems have evolved to a complex system involving innate and adaptive immune systems. Innate immunity starts with physical barriers (skin, mucus), and involves non-specific defences from immune cells such as neutrophils and natural killer cells. The adaptive immune system has evolved from innate immune cells, which include B-cells that produce antibodies, and is governed by lymphocytes, primarily alpha/beta, which include CD4+ helper, CD8+ killer and FOXP3+ regulatory T-cells.

Adaptive immune cells recognise other cells via antigen presentation. A small peptide fragment of a native, viral or cancer protein (the antigen or epitope) is “presented” on a cell surface complex made of proteins called the major histocompatibility complex (MHC). These epitopes are then recognised by proteins (e.g. the T-cell receptor, TCR) on the surface of individual T- or B-cell lymphocytes (Figure A). The repertoire of human T-cells and B-cells can recognise up to 109 individual patterns. The outcome of antigen presentation and recognition is determined by the balance of interactions between pairs of immune checkpoint costimulatory molecules (e.g. CTLA4-CD80, OX40-OX30L, CD154-CD40, PD1-PDL1; Figure B below).

Uncontrolled immune activation leads to autoimmune diseases like ulcerative colitis, dermatitis and interstitial pneumonitis. The activity of the immune system is modulated and carefully controlled by costimulatory molecules called immune checkpoints. When antigen recognition occurs, a committee of other molecules interact on the surface of the immune cell and the target cell to determine the balance of the interaction. If the signals are largely positive, the immune cell activates and is primed to attack the antigen presented by the target cell. However if the balance of signals is negative, then the immune cell can become inactivated, sometimes permanently, and the antigen is accepted as a normal/self antigen (Figure B). Immune checkpoints of relevance to cancer include CTLA4, PD1 and PDL1 (see above).

Cancers are edited by this process, and may be eliminated at this point; so called immunosurveillance. Some cancers can enter a state of equilibrium with the immune system, and though present, remain clinically undetectable and irrelevant. If this balance is then later disturbed, for example by immunosuppression caused by age, illness or iatrogenic causes, the cancer can escape and evade immune control.

Cancer immunotherapies attempt to redress these escape mechanisms at many points, but a key mechanism for cancer cells to evade the immune system seems to be via negative immune checkpoint signalling (Figure C). 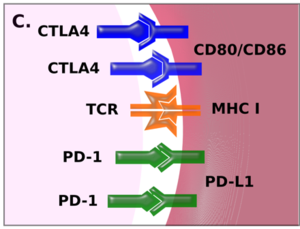 Cancer immunotherapies can be categorised by whether: 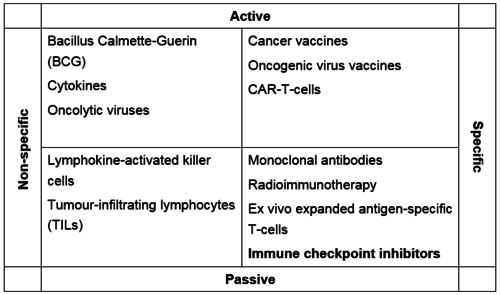 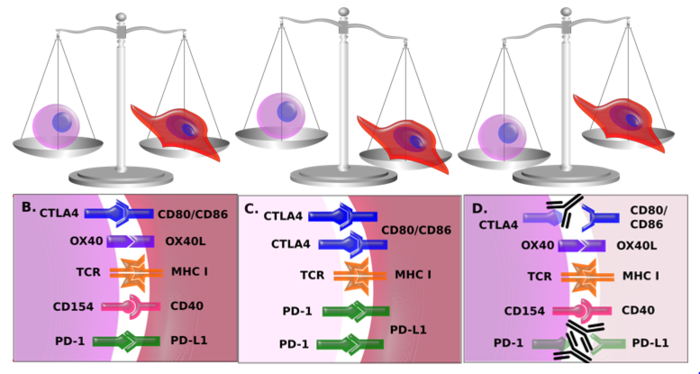 Side effects of checkpoint immunotherapy antibodies

The side effects of immune checkpoint antibodies are due to autoimmune over activation. Some side effects like diarrhoea and rash are relatively common, and though mostly mild and manageable, they can sometimes be life threatening.

Checkpoint immunotherapy must be managed with caution, diligence and robust and routine communication between patients and their health carers.

Examples of immune related side effects include:

Any illness in a patient treated with checkpoint inhibitors should have an autoimmune cause ruled out.

Immune-related side effects are also noteworthy for being slow in onset, usually only occurring after 1-2 doses are given, and may even occur after treatment has completed. They are also slow to resolve, so if steroid immunosuppression is required to control immune related side effects, this is usually titrated downwards over at least 4 up to 8 weeks. 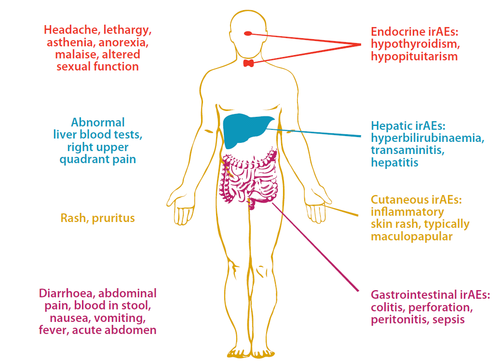 Side effects of cancer treatment in general are characterised by their grade, or intensity: