Soft tissue sarcoma (STS) encompasses a broad group of cancers arising from mesenchymal cells and their progenitors. There are over 50 subtypes of STS, classified according to their tissue of origin (see Table 1). Approximately 1500 new cases of STS are diagnosed in Australia per year.

Most STS can be divided into two main groups based on their mutational profile.[1] The majority of STS have a complex unbalanced karyotype with genomic instability and heterogeneous mutations between tumours of the same type. By contrast, about one third of STS have a specific translocation or characteristic point mutation (eg synovial sarcoma, Ewing’s sarcoma, clear cell sarcoma).

Clinical presentation depends on the location of the primary tumour. STS can simply be grouped into those found on the extremity and those of the trunk (including retroperitoneum). The following clinical features should act as red flags and raise suspicion for a diagnosis of sarcoma: - a mass with a diameter greater than 5 cm in size - a rapidly growing mass - a mass which is atypical in clinical presentation These lesions should be imaged and referred to an experienced sarcoma surgeon.

Any soft tissue lesion located deep to the deep fascia on imaging should raise the suspicion of a soft tissue sarcoma. The AJCC staging system for soft tissue sarcoma involves tumour size, lymph node status, presence of metastatic disease as well as grade (TNMG).[2] Other significant prognostic factors include anatomical location, tumour depth relative to the deep fascia, mitotic rate and histological subtype.[2] Retroperitoneal sarcomas often grow to a very large size prior to presentation as they characteristically push adjacent organs away and are located in an inconspicuous location.

If a mass raises the suspicion of an STS, the optimal management is referral to a tertiary centre specialising in the management of sarcoma prior to any intervention. The diagnosis is typically made on core biopsy. The biopsy approach needs to be considered as part of the management as the biopsy tract is excised at the time of surgery. As such the biopsy should be performed in consultation with the surgeon planning the resection. Given the rarity of the disease, and the implication of the histological diagnosis, the pathology should be reviewed by an expert histopathologist.

Staging of STS involves assessment of the primary and the identification of metastatic disease. For STS of the extremity, the best primary staging modality is MRI. This provides excellent anatomical detail regarding the relationship of the tumour to important adjacent structures. Functional imaging using thalium scan or PET can also be useful to identify the focus of tumour with the highest metabolic activity to guide biopsy. A CT scan of the abdomen and pelvis is the primary modality for imaging retroperitoneal sarcoma.

Lymph node metastases are rare in STS as metastasis is usually via the haematogenous route. The most common site of metastatic disease is the lung and all patients with a new diagnosis of STS should be staged with a CT scan of the chest.

Management of STS requires a multidisciplinary team. Surgery is the definitive therapy for most STS. The principles of surgery include an en-bloc resection of the lesion with any adjacent involved tissues. For extremity sarcoma, limb sparing surgery can be achieved in the majority of cases with only a small percentage requiring amputation.[3] For retroperitoneal sarcoma, adjacent organs such as the kidney or colon may need to be resected to achieve a clear margin.

Radiation therapy is often used as an adjunct to surgery to reduce the risk of local recurrence. Preoperative radiation is preferred as a smaller area can be targeted, however there is an increased risk of wound complications following neoadjuvant radiotherapy. Although radiotherapy reduces the risk of local recurrence, it has not been associated with an improvement in overall survival. This is likely because the majority of patients who die from STS do so as a result of metastatic disease.

Certain tumour types such as rhabdomyosarcoma are highly chemosensitive, others such as liposarcoma are relatively chemoresistant.

Soft tissue sarcomas, particularly of the retroperitoneum have a propensity to recur. The majority of recurrences occur in the first 5 years, however recurrences are not uncommon beyond 10 years. Therefore patients with STS need to be continually monitored for recurrence for an extended period of time. Surveillance involves an assessment of the primary site as well as for evidence of pulmonary metastases.

A 50-year-old man presented to his GP with 2 months of increasing abdominal distension and right lower abdominal pain. He had been previously well with no significant past medical history. Examination revealed some mild tenderness and fullness in the right iliac fossa.

A CT scan of the abdomen revealed a 10x16 cm solid mass in the retroperitoneum displacing the abdominal viscera to the left. The mass was heterogenous, and given its deep location was suspicious for a soft tissue sarcoma.

The patient was staged with a CT scan of the chest and a PET scan. These demonstrated no evidence of metastatic disease. The patient was referred to a specialist cancer centre with extensive experience in the management of soft tissue sarcoma. A core biopsy was organised using the PET scan to identify the area of the tumour with the most active FDG avidity and therefore the most informative area of the tumour to biopsy. The biopsy was consistent with a high-grade dedifferentiated liposarcoma.

Given the absence of metastatic disease, a decision was made to continue with curative management. The patient was planned for neoadjuvant radiotherapy in an attempt to maximise the chance of local control after definitive surgical resection. After completion of radiotherapy, repeat imaging again did not demonstrate metastatic disease and the patient underwent resection of the mass including the right kidney, an area of abdominal wall where the tumour was adherent and an adherent loop of small bowel. Resection of adjacent viscera is often required for retroperitoneal sarcoma in order to maximise the chance of a complete resection. Histopathology revealed a 17 cm mass consistent with high grade dedifferentiated liposarcoma. There were some areas of necrosis in the tumour consistent with the radiation effect but the response to radiotherapy was small. The tumour stage was Stage III (T2b, N0, M0 G3).[2]

The patient made a good post-operative recovery and was followed up with a repeat CT scan of the chest, abdomen and pelvis every 6 months looking for signs of recurrence or metastatic disease. The patient developed chronic diarrhoea postoperatively consistent with radiation enteritis, a common side effect of abdominal radiation.

After 24 months, a CT scan demonstrated a new nodule on the posterior abdominal wall in the previous operative field. This was highly suspicious for a local recurrence. Repeat staging investigations failed to identify any metastatic disease and the patient was taken back to the operating room for resection of this mass.

The patient was again followed with repeat imaging every 6 months and after 15 months, presented with abdominal pain. Repeat CT scan demonstrated five new masses consistent with multifocal recurrence. The patient was referred for palliative chemotherapy due to the disease progression, which was now unresectable.

This case demonstrates a common disease course for patients with large high-grade retroperitoneal sarcoma which due to their advanced initial presentation, have a high risk for local recurrence.

A 45-year-old woman presented with a 4 week history of a lump in the inner right thigh. The lump was not painful and was growing slowly. She presented to her GP who thought this may be an enlarged lymph node and arranged an ultrasound. The ultrasound demonstrated a 5 cm mass within the adductor compartment of the thigh. Given the mass was deep to the deep fascia, suspicion of a soft tissue sarcoma was raised.

The GP referred the patient to a unit specialising in the management of soft tissue tumours. An MRI of the thigh showed a solid mass within the adductor compartment of the thigh. A PET scan demonstrated heterogenous uptake but also showed two FDG avid lesions in the left lung. A core biopsy was performed of the most FDG avid area of the mass in the thigh. This was consistent with high-grade malignant fibrous histiocytoma.

To better characterise the lung lesions, a CT scan of the chest was performed which demonstrated multiple bilateral lung nodules, the largest of which was 15mm in diameter in the left upper lobe (figure 3). Given the large, high grade primary lesion, these lung nodules were consistent with metastatic disease (Stage IV – T2b, N0, M1, G3).

As the primary lesion was asymptomatic, there was no role for local therapy (surgery or radiotherapy) and the patient was referred to medical oncology and was commenced on palliative chemotherapy with doxorubicin and iphosphomide. She achieved a partial response but progressed rapidly after 9 months. At this point, she was enrolled in a clinical trial of a novel agent but progressed with widespread metastatic disease after 6 months.

This case demonstrates the propensity of high-grade sarcomas to metastasise to the lungs. This is associated with a poor prognosis.

Table 1: Soft tissue sarcomas are named according to their tissue of origin. 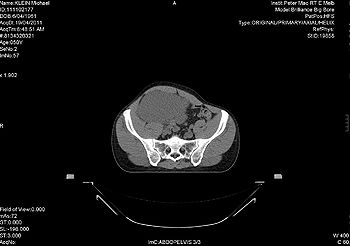 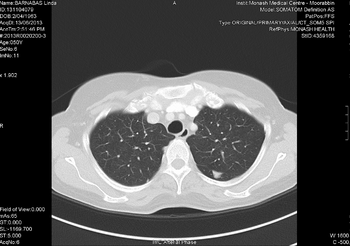