In 2018, prostate cancer was the cause of 3,264 deaths.[1] It is the second most common cause of cancer death in Australian men after lung cancer.[1] The ratio of prostate cancer mortality compared with incidence (deaths divided by new cases per year) is low compared with most other cancers.[2] The number of new cases recorded in 2016 was six times the number of deaths.[1]

Age-standardised incidence rates for prostate cancer have increased from 31.2 cases per 100,000 males in 1982 to 67.3 cases in 2016 (See Figure 1).[1] Between 1982 and 2018, age-standardised mortality rates have reduced from 12.7 deaths per 100,000 males to 10.2 deaths (See Figure 1).[1] The increased incidence is thought to reflect an increase in detection of prostate cancer rather than a true increase in incidence, as the rise closely followed the increasing use of prostate-specific antigen (PSA) testing for the disease.[3]

It is likely that PSA testing uncovered a large pool of undiagnosed, asymptomatic prostate cancer cases that may not otherwise have been diagnosed until symptoms developed, or may never have been diagnosed. [4] While the fall in prostate cancer mortality might indicate a beneficial effect of PSA testing, it is also likely to be attributable to improvements in treatment.[5]

Increases in PSA testing and screening have been accompanied by an increase in hospital admissions and in prostatectomies and other treatments (e.g. radiotherapy) for prostate cancer[4]. See Economic impact, below. 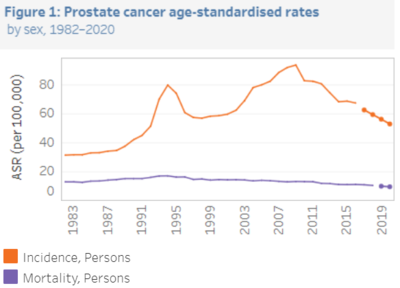 Impact in relation to age

On the most recent national data available, prostate cancer is the most expensive cancer in men in Australia, and the third most expensive overall.{{Cite footnote|Citation:Australian Institute of Health and Welfare 2013 3} In 2008-09, health system expenditure on prostate cancer was $347 million, accounting for almost 8% of all health system expenditure on cancer. Of this, $195 million was for hospital inpatient costs, $122 million for prescription pharmaceuticals and $30 million for out of hospital costs.[7].

A state-based analysis by Access Economics estimated the total lifetime cost of prostate cancers diagnosed in New South Wales in 2005 was approximately $2.2 billion. This amount included $297 million in health system and other financial costs (including lost productivity) and $1.9 billion in lost wellbeing and premature death.[8].