Table 1 shows the latest national incidence count of melanoma, as provided by the Australian Institute of Health and Welfare (AIHW), and the number of paid Medicare services for non-melanoma skin cancers (NMSC: basal cell carcinoma, squamous cell carcinoma) based on Medicare records. The latest mortality statistics for melanoma and NMSC are provided as reported by the Australian Bureau of Statistics (ABS) for 2020.

At least 2 in 3 Australians will be diagnosed with skin cancer in their lifetime.[4] The risk is higher in men than in women (70% vs. 58% cumulative risk of NMSC before age 70[5]; 65 vs. 44 age-standardised incidence rate of melanoma[2]). The risk of mortality is also higher for men - 67% of Australians who die from skin cancer are men.[6]

* Medicare data for numbers of services for NMSC in 2021 are available,[3] otherwise latest incidence data for NMSC is from 2002.[7]

NMSC mortality includes deaths from the common skin cancers (SCC & BCC) and deaths from the rarer variants like Merkel cell tumours, dermatofibroma protuberans, and others.

AIHW data shows a recent decline in melanoma mortality rates (Figure 1). There has also been a recent decline in the age-specific incidence rates for melanoma among those under the age of 40 years, [8] and a significant decline in excision rates of non-melanoma skin cancer among those aged under 45 years.[9] This follows earlier observations of stable incidence trends among young people in Australia, who are likely to have reduced their UV radiation exposure as a consequence of long-running public education campaigns to improve sun protection. A similar pattern has been observed for several other high-risk countries including New Zealand, North America, Israel and Norway.[10] These recent changes illustrate the importance of decreased UV exposure in childhood as a key contributor in lowering skin cancer risk later in life.[10] 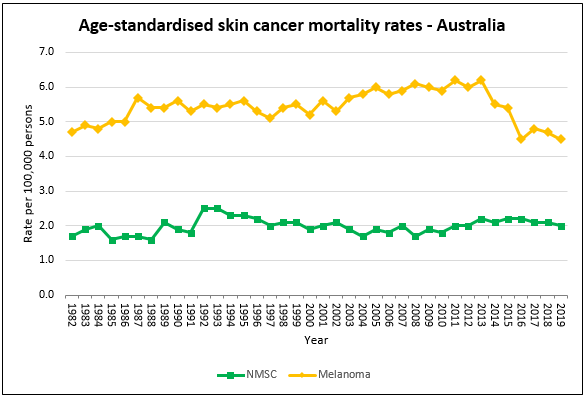 The rates were age-standardised to the Australian population as at 30 June 2001, and are expressed per 100,000 population

In Australia, the age-standardised incidence rate for melanoma increased by 103% between 1982 and 2018, from 26.7 cases per 100,000 persons to 54.1 cases per 100,000 persons,[2]. However, how much of this increase is due to a real increase in the underlying disease, and how much is due to improved detection methods, is unknown. The incidence of melanoma of the skin rose at around 5.0% per year during the 1980s, moderating to 2.8% per year after that up until 2010.[12] It is predicted that the initial rapid increase is partly attributable to individual behaviour and the use of solariums, resulting in increased exposure to solar ultraviolet radiation.[13][14] The moderated trend seen after the 1980s is consistent with increased awareness of skin cancer and improved sun protective behaviours as a result of extensive skin cancer prevention programs dating back to the 1980s.[8]

There is an observable age gradient for melanoma incidence according to AIHW data:

Melanoma is the most common cancer diagnosed in young Australians aged 15-29 years, accounting for 15% of all cancers in this age group.[2] However, research in Queensland suggests a decline in the incidence of thin invasive melanoma since the mid- to late 1990s among young people who have been exposed to Queensland’s primary prevention and early detection programs since birth.[15] Nationally, age-standardised incidence rates for melanoma fell from 96 new cases per 1 million young Australians (aged 15-24) in 1985–1989 to 44 new cases per 1 million in 2010–2014.[16]

Australia’s high incidence of skin cancer is attributable to a combination of its predominantly fair-skinned population and high levels of ambient UV radiation due to proximity to the equator.[17][18][19]

Although NMSC is the most common cancer type in Australia, it is often reported that breast cancer is the most common cancer in women and prostate cancer is the most common in men. That’s because most Australian cancer registries don’t routinely collect data for these more common forms of skin cancer – only the most serious, melanoma.[23] NMSC are often self-detected and are usually removed in doctors’ surgeries, sometimes without histological confirmation due to destructive treatment techniques, or treatment with topical creams[5] where tumour sites are only excised in post-treatment testing.

As the latest incidence data is estimated from self-reported, histologically confirmed (81.5%) and unconfirmed, NMSC treated in 2002,[5][7] Medicare service numbers are provided as a proxy measure below.

* Medicare data for numbers of treatment services for NMSC in 2021 are available,[3] otherwise latest incidence data for NMSC is from 2002.[7]

Findings from the annual BEACH surveys of general practice conducted from 2006 to 2016 showed that skin cancer predominated as the cancer most often managed (by way of medications, clinical and procedural treatments, ordering of pathology or imaging tests) in GP-patient encounters, and was consistently among the top ten conditions managed by GPs.[24]

Skin cancer cost the Australian Health System more than $1.68 billion (including diagnosis, treatment and pathology) in 2018/19. $1.327 billion of this was attributed to NMSC and $357 million was attributed to melanoma.[25]

It is the most expensive cancer type to treat, and overexposure to solar UVR is also estimated to account for the highest amount of spend on cancer that can be attributed to a risk factor, at 31%.[22]

In Australia, relative survival after diagnosis of melanoma of the skin is very high when compared with other types of cancer.[2] The 5-year relative melanoma survival rate increased from 89% in the period 1989-1993 to 93% in 2014-2018[2]

Australian survival rates from melanoma are generally higher than in other countries due to the high proportion of thin lesions, according to the Cancer Epidemiology Centre at Cancer Council Victoria. Survival rates are higher in countries where there is greater melanoma awareness due to earlier detection.[26]