Skin, like all body tissue, is made up of cells. The two main cell types in the outermost layer of skin (the epidermis) are called keratinocytes and melanocytes.There are several layers of epidermal keratinocytes with the lowest level being known as the basal layer, and the main viable (live) layer composed of squamous cells. Melanocytes produce the skin pigment melanin. Different skin cancers are named after the skin cell that the cancer resembles or develops from - basal cell carcinoma, squamous cell carcinoma, and melanoma. 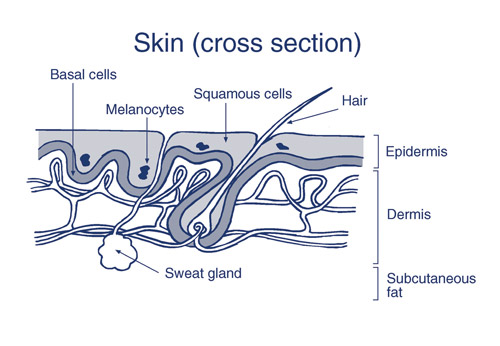 Melanoma is the least common skin cancer but it is also the most dangerous.[1] Melanoma is the result of unrepaired DNA damage to melanocytes. This triggers abnormal cell growth[2][3][4][5] attributable to a combination of genetic risk factors and overexposure to ultraviolet (UV) radiation.[6]

Cutaneous (malignant) melanomas are classified into four types by histological appearance and biological behaviour (the way they look under the microscope, how thick they are, how far and fast they’ve spread). However, there are melanomas that are of unclassifiable histogenetic type.[7][8] It has been argued that not only histological appearance but the particular "biochemical and genetic aberrations (abnormalities) correlating with anatomic (body) site and amount of cutaneous (skin) exposure to sunlight" should also be taken into account when classifying tumours.[8][9]

Melanoma may arise from a pre-existent melanocytic naevus (mole), but can also grow de novo on the skin, without a pre-existing pigmented lesion. A carcinoma in situ is an early form of cancer that is not yet invasive. In the case of melanoma, in situ means that abnormal skin cells are contained within the epidermis and have not penetrated deeper into the dermis.

Current melanoma subtype classifications are less useful for classifying paediatric melanoma; a retrospective study of melanomas diagnosed before 20 years of age found that 44% were ‘histopathologically unclassifiable using current melanoma subtypes’. The authors suggest an adapted, paediatric-specific 'ABCDE' criteria be used in conjunction with the standard in order to identify lesions as cancerous.[17] 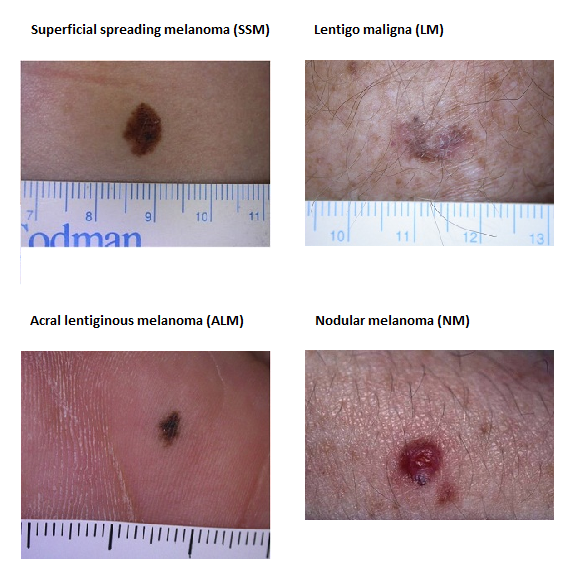 Malignant melanoma is a spectrum with highly curable, thin primary cutaneous melanoma on one end and less treatable, often deadly metastatic melanoma on the other.[3]

According to the current melanoma staging system, as recommended by the American Joint Committee on Cancer 2018,[18] tumours are classified based on prognostic factors. Factors include tumour Breslow thickness, the appearance of ulceration, and mitotic rate (speed of cancerous cell-division). Clarke’s level of invasion is considered when the mitotic rate cannot be determined. Of these factors, Breslow’s thickness is the most important in determining prognosis for invasive melanomas, and is used to determine tumour severity for the early (prior to metastasis) stages 0-II.

Clinical stages are classified as 0-IV; from non-invasive to invasive.

Stage 0 (melanoma in situ) is when the tumour is confined to the epidermis. Stage I-II tumours are >4mm thick with or without ulceration. Stage III tumours have developed in-transit metastasis, spreading more than 2cm from the primary tumour site through a lymph vessel, or have metastasised to a local lymph node. Stage IV means the tumour has metastasised to distant skin sites, lymph nodes or internal organs such as the lungs, liver, and brain.[18]

Breslow’s thickness (or depth) classifies tumours as thin melanomas (≤1mm), intermediate (>1-4mm), and thick (>4mm) according to the distance between the “upper (granular) layer of epidermis and deepest point of tumour penetration”.[19] Tumour thickness is more predictive of prognosis than the level of tumour invasion.[19] Thin lesions ≤1mm in thickness are treated through surgery and have a high, almost 100% (depending on presence of ulceration), five-year survival in Australia.[20] In contrast, survival for lesions >4mm thick is only 54%.[20]

Nodular melanoma and increasing age are significantly associated with melanoma thickness.[16][21] The median thickness for nodular melanoma was 2.6mm at diagnosis compared with 0.6mm for superficial spreading melanoma.[12] Due to its association with tumour thickness and hence mortality, nodular melanoma is the largest contributor to melanoma mortality within Victoria.[12]

Non-melanocytic skin cancers (NMSC), also known as keratinocyte carcinomas, are cancers of the epithelial layer (epidermis). They are more common than melanoma, with incidence of NMSC in Australia more than five times the incidence of all other cancers combined in 2002, the highest in the world.[23][24] According to Medicare, there were 1,148,214 NMSC treatments in Australia in 2021.[25] In 2002, risk of NMSC before the age of 70 was 69% for men and 58% for women (total risk of 64%), however NMSCs before 40 years of age are relatively rare.[23] Basal cell carcinoma (BCC) is the most common NMSC.[24]

As in the case of melanoma, UV exposure (chronic exposure for SCC and BCC, intermittent exposure for BCC) is the main environmental risk factor for NMSC.[26][27][28][29][30] However, the exact role of UV exposure (amount, timing, and pattern of exposure) is yet to be determined,[31] particularly for BCC.[32] As with melanoma, there are also host risk factors that increase risk of developing NMSC.[33][34]

Basal cell carcinoma (BCC) is the most common malignancy in humans and makes up approximately 70% of non-melanocytic skin cancers within Australia.[23] BCCs are common on areas which typically receive high or intermittent sun exposure.[35] Within Australia, BCC is more common in men than women, with the majority of BCCs appearing on the head and neck, followed by the trunk.[23]

BCC appears as malignant neoplasms (abnormal tissue growth) of basal appearing cells, which may develop as a pearly pink or flesh-coloured papule (small lump) or a scaly/dry area that is pale pink to red in colour, giving the appearance of an unhealed sore. BCCs may bleed and become inflamed, and dead tissue may slough off (ulcerate),[36] though they are usually asymptomatic.[34]

BCC rarely metastasises to become life-threatening,[37] unless it is left untreated and allowed to develop into a high-risk tumour larger than 2cm in diameter or 4mm in thickness.[34][38] Other consequences include the damage/destruction of surrounding tissue, and increasing difficulty of complete surgical excision, thereby increasing the chance of recurrence.[36] If treated with the ‘gold standard’ treatment—Mohs micrographic surgery (MMS)— the 5-year cure rate in Australia is high at 98.6% for excision of a primary BCC.[39]

Squamous cell carcinoma (SCC) makes up approximately 30% of non-melanocytic skin cancers.[23] SCC usually appears on parts of the body most often exposed to the sun such as the head and neck, arms and legs.[23][35] A SCC appears as a thickened, red, scaly spot and may be tender to the touch, though usually SCCs are asymptomatic. SCC may become crusted or ulcerated.[34] Unlike BCC which develops de novo (in the absence of a precursor lesion), SCCs typically arise from existent pre-malignant, precursor lesions (actinic or solar keratosis, and Bowen's disease).[32][38] However, de novo SCC can occur and is an aggressive, distinct clinical variant.[40] SCC may also arise from chronic ulcers or scars.[34]

SCC may grow more rapidly than BCC.[34] Like BCC, SCC does not typically metastasise but requires treatment to prevent tumour growth.[40] Metastasis, when it occurs, is usually to regional lymph nodes, and is more common for SCC arising on the lips or ears. If treated with MMS, the gold standard treatment, the five-year cure rate is 97.4%.[41]